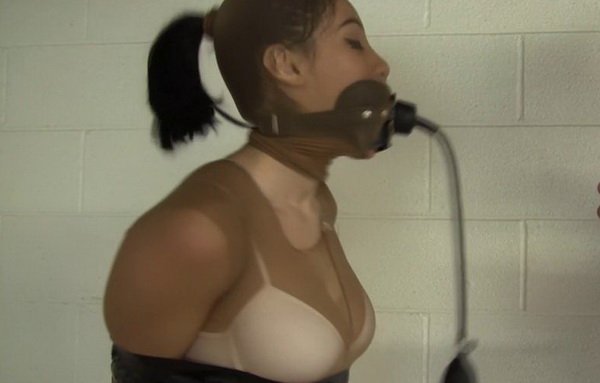 Mr Big Boss has Sahrye in the warehouse trying out a new gag. It’s a strap held inflatable butterfly gag and she shoves it into her mouth and he straps it onto her tightly. With the gag on her she is then handed a pantyhose leg to hood herself with and she pulls it down over her face. Mr Big Boss cuts out a hole and pulls her ponytail through then cuts a similar hole that he pulls the pump through. With her gagged pretty well her arms are taped tightly together with black electrical tape at the wrists and elbows. A bit more thin tape is wrapped in a crossing pattern around her arms and forearms before he pumps her gag another time eliciting a squeal from Sahrye.