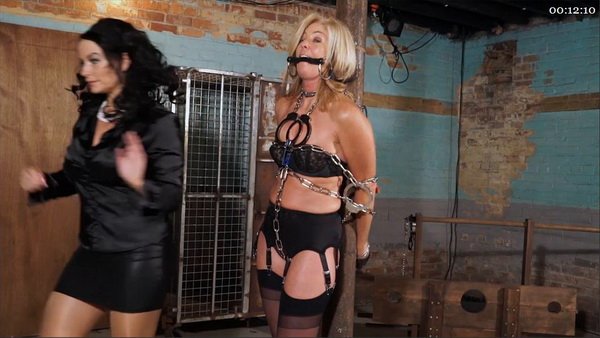 Dakkota waits for her next client. The woman happens to be a gambling addict and is in major need of cash. She saw an advertisement for a domme in the back of a weekly paper and thought the woman must have a lot of cash on hand. She makes the appointment and asks the woman some personal questions. She has no man around to help her and she doesn’t have a weapon. A gun is pulled and the domme is forced into her own contraption (cut to Dakkota struggling gagged). The woman looks around and robs her and instead of leaving she decides to have a bit more fun with her and chain her to a post- you know for stress relief. (The clip does not show her coming out of the bondage contraption, she is show attached to the post). Many more chains are added including one around her neck. The gag is removed and an entire hanky is stuffed in her mouth. Duct tape is wrapped around her head and the post and she can not move. The gambling money grabs the womans things and heads out of there leaving her there for her next client to find. [borntobebound] Cat burglar caught & tied up before she called the police [hogtie, gagged]

After she tied me up, she took off her panties and stuffed them in my mouth! [Rachel Adams]

Star tied up and gagged, Good thing my neighbor heard my muffled cries!