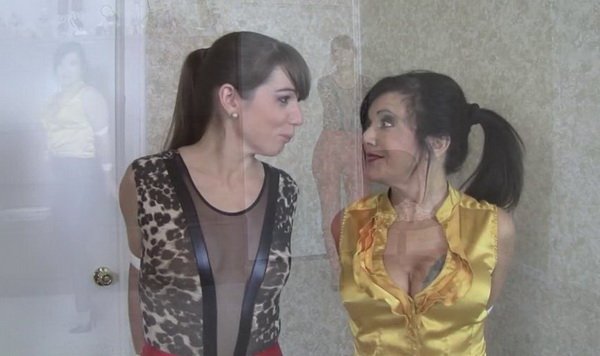 GiGi wanted me to teach her how to shimmy her ass while she walked in really tall high heels. We both had on tight spandex disco jeans and black pumps. I strutted across the room and told her to follow me. We continued this for a bit until Mr. Big Boss came into the office.He pulled in a chair that had rope and gag materials laying on the seat. I told him that I was trying to train GiGi on how to walk smoother in her high heels but he said the best practice was without any arms. GiGi gulped at his statement. He tied my arms behind my back first. While he did the same to GiGi he instructed me to continue to walk back and forth in the room, he liked the eye candy. Next, were the gags. He stuffed both of our mouths full of white cloth and then wrapped microfoam tape tightly around our lips. He made us kneel, while he tied our ankles together. While GiGi and I were on our knees, we shared a couple of gag kisses and flirted with each other… Hogtied and panty gag woman, you can’t leave me here cuffed up!