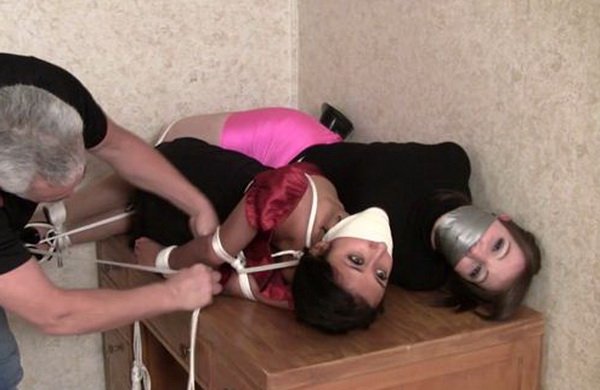 It was one of those days when the work just seemed to pile up. The Boss called me into his office and I asked him hastily, “What he needed?”, he pointed out the rope and that was enough explanation for him. I complained that I had a lot of work to do. The Boss then insulted my training abilities, since I didn’t trust any of the other secretaries to type this extremely important report up, I must not be doing my job training them. We bickered back and forth for another minute or so before I conceded to what he wanted, to tie me up. As the Boss tied my arms together, behind my back, I asked him if there was a particular reason that he was tying me up. Apparently, there was going to be a visiting Boss today from the sun shine state. The Executives wanted to make sure that this visit went very well and that the company showed the visiting Executive a really good time. I was being put on display again. Just like the time the overseas clients came into town. After my elbows and wrists were tightly secured, the Boss started on my gag. He shoved A LOT of mouth stuffing into my mouth. My cheeks were puffed out and my gag reflex was close to being triggered. Mr. Big Boss then wrapped silver tape around my head and over my pony tail. He wrapped the tape forcefully, blaming it on the fact that I was standing too close to the wall. I made ooww noises during the entire wrapping process and once he was done, I gave him the evil eye. Take that!