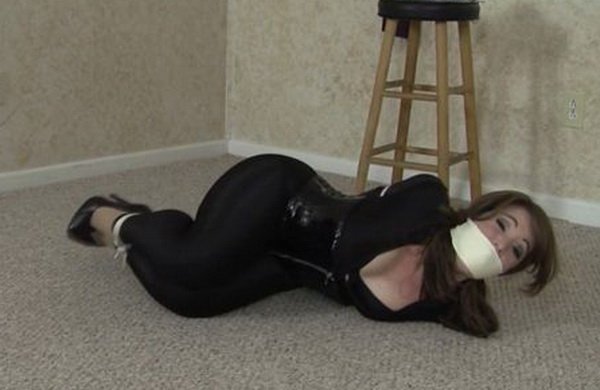 Elizabeth is sitting on a stool wearing a tight spandex catsuit, waist cincher, leather opera gloves, and 6 inch leather pumps. The door opens and her client walks in. Immediately, she barks at him to get on his knees and to clean her high heels. The tall blonde man kneels on one knee in front of her and reaches for her shoe with one hand and a piece of rope with another. Elizabeth notices the rope in his hand and commands him to drop it. Suddenly, Elizabeth finds herself double crossed by her client. He pulls her off the stool and she struggles against him. He manages to get her arms behind her back while she thrust herself against him. Taking the piece of rope he picked up, he binds her arms tightly behind Elizabeth’s back. Elizabeth demands to be let go several times, but her client doesn’t listen. After some rough groping, he decides it’s time to shut her up. The blonde man stuffs cloth into her mouth, that was meant for him, and wraps microfoam tape securely around her head. He continues with his rough groping before picking Elizabeth up and putting her on the ground. Her client tells her that he has something to do and leaves her to struggle on the ground. Elizabeth does just that, while making mmfphing noises through the tight microfoam gag. After a bit, the blonde man comes back and places the domme into a hogtie. Leaving her there for the next client to find. |OfficePerils| Johannie Hogtied, Ballgagged : Back In The Office With A Bang