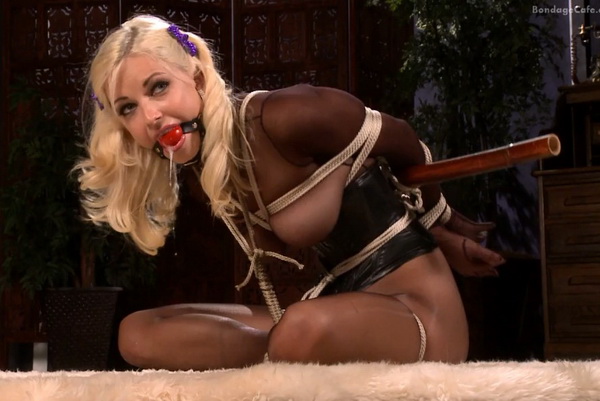 Danielle is certainly a tasty creature – regardless of the situation. I decided to put her in something fun: A pair of interesting pantyhose, a tight corset and a lovely sheer top. Your basic Cafe bondage outfit… I wanted to do a bamboo sort of tie – something I hadn’t done for quite awhile. I used the beautiful tan rope (from the wonderful folks at Rainbow Rope), which I’ve been told has become a sort of calling card of the Cafe. In fact, thinking back, this whole combination together just seems to work. That is probably why I’ve used it. I just love the tan rope and leather. I always end up doing something complicated – but that just seems to happen. You wouldn’t think that a color of rope would change how I tie, but in this case it does.
When I say complicated, I mean just trying to do something really cool, but not overblown. It’s not that hard to put a lot of rope on a girl, but to make it not look messy, that is the difficult part. This particular tie has a lot of complex points where the rope all comes together and I was really pleased with it over all. The effect on Danielle is probably more important than the tie. It really worked from that “helpless” standpoint that everyone wants to see – and she was having a lot of fun too. I told Danielle that I wanted to her to let go, including the drooling aspect. I’ll let you in on a little secret. I don’t think I can name one bondage girl that enjoys drooling all over herself. You can’t blame them. I mean would you like to do that – but somehow, it can be really sexy… and Danielle just let it go…
And to make sure that it really kept coming, I tied her neck down to her feet. She is a forward curving girl. That is just the way her body works. She isn’t a back archer like Randy, she is a ball tie person. This isn’t a ball tie, but you have to understand that the corset is making it really hard to bend forward – so this is a lot more stringent that it may seem at first. I certainly did open the water works though… fun stuff. I think I’ll let Danielle hang out by herself. Give her a little time to see if she can get free. Or maybe a lot of time. Somehow I don’t think there is any amount of time that is going to help her. I don’t think she’s figuring a way out of this one. Actually, I know she isn’t. She can struggle as much as she wants to… 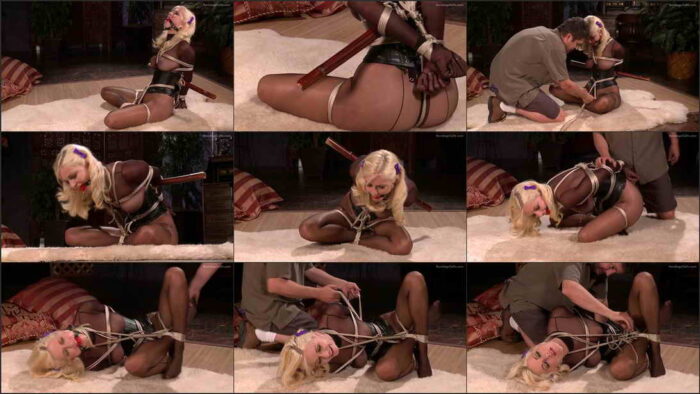