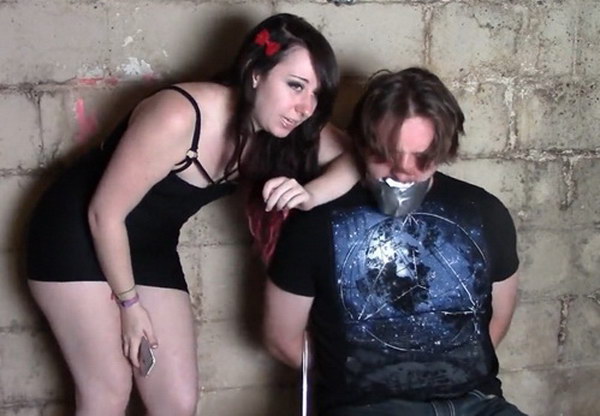 Dakota knows that her boyfriend is cheating on her and decides to punish him for what he’s done. Having tied him on a chair in the basement, Dakota clamps a hand over his mouth and holds on really tight as he begins to struggle. She spits in his mouth and force him to smell a pair of her very dirty panties. Dakota ruthlessly plug her boyfriend’s nose and stuff her dirty panties in his mouth. She tapes his mouth shut with silver duct tape wrapped around his head. Dakota takes several selfies with her bound and gagged boyfriend to show everyone she knows before she leave him with a final kiss on his panty packed mouth. Girlfriend Dakota & Saucey Taped Up, Gagged For The First Time

POV Dakota & Gemi in: Gag On Your Sister’s Dirty Panties

Alex & Dot in Tape Bondage, Taping up my Annoying Stepmom