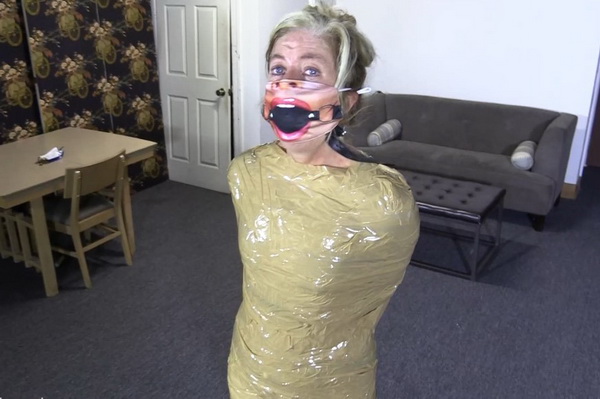 Boss lady comes in and sees her worker not complying with the mask mandate. Dakkota reluctantly puts it on but when boss lady leaves she removes the pointless mask. Boss lady returns very upset that Dakkota is not obeying the rules. She decides to punish her for not obeying. Dakkota strips to her pantyhose and gets another pair as a top paired with a little ballgag which goes under another facemask. Dakkota is eventually entire covered in packing tape while standing in her sling back heels with a crotch rope tied off above to keep her from tipping over. Once entirely covered in tape she struggles for a bit thinking that this must be the end to the ordeal but it isn’t. Boss lady cuts the ropes that helped her stand tall and lays her down on the ground. Her mouth now stuffed with nylon and her head covered with nylon. Boss lady tapes up her face and then uses another nylon to cover her eyes. She mmmphss about entirely helpless on the floor with just her pantyhose covered hands and feet exposed. 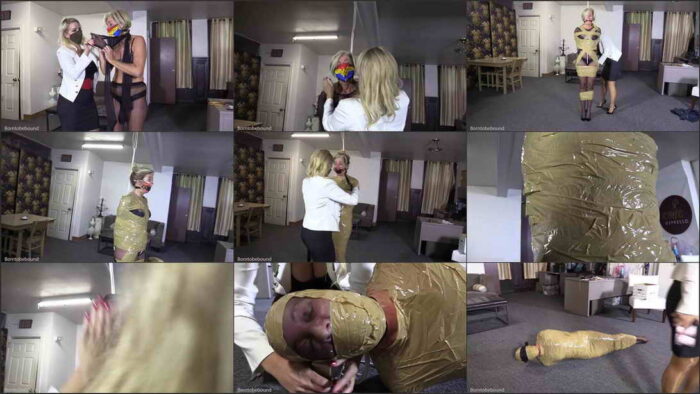 Little Red Girl and Diamondly, Cuffed up cuties in trouble in another country, borntobebound

The Mummification of Stella Cox… Boundhoneys