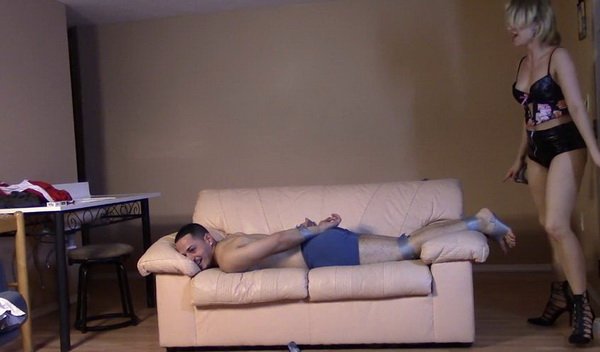 I was doing a webcam show and really getting into it when the tips began to come in steadily. I was just about to strip naked when I felt the presence of someone behind me. My intuition is always spot on. When I turn around I see D_Ink standing behind me. This was my so called best friend for many years. I don’t say the term best friend lightly. Very few people have earned that title in my lifetime. And yet, here was D staring at me. I immediately instruct him to sit down and I confront him about why he was watching my webcam show. I tell him it was completely inappropriate. I expected better out of him, especially since he was staying with me since he fell on hard times recently. I decide to show other men on the webcam show what happens when they cross me. I tell D he’s in for a rude awakening. I strip him out of his clothes and grab my duct tape. In just his boxers I tape his arms, legs, and ankles. He’s in a world of pain. He begins to struggle but I have the extra strong duct tape this time, and he can’t do a damn thing to stop me. How do you like that asshole? I ask him. I even tape gag his mouth tightly stuffing my panties into his mouth first. D_ink struggles hard, and gives the whole viewing audience one hell of a good show

A big fat number plate on her bound ass

Asiana Starr Yearning to be Gagged and Tied