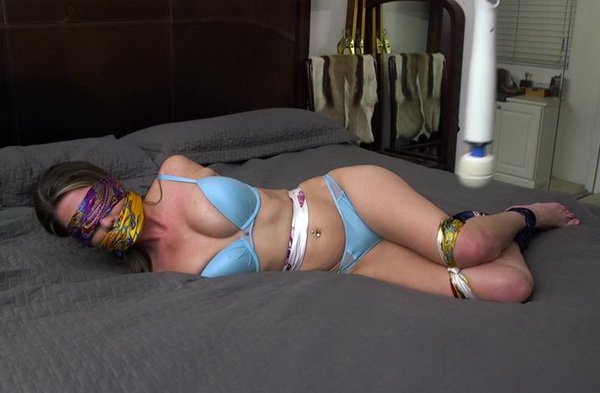 Chrissy is doing a webcam show and announces that she’s had a special request from a fan. She explains that she is to be tied up with silky scarves and has to try to escape within 5 minutes or else she will pay a penalty. She confidently accepted the challenge not knowing what the penalty will be. She’s invited a friend over for assistance to help since she can’t tie herself up all by herself! Then she turns around, puts her hands behind her back and flirtatiously announces that she is ready! Now Chrissy is all tied up and ready to start the challenge… but her assistant thinks a blindfold would be a good addition to make it even harder for her! Chrissy welcomes the additional challenge. Once blindfolded she asks him if she can start… when he suddenly stuffs her mouth with a big wad of cloth! Chrissy playfully protests as she wasn’t expecting this turn of events! Then he gags her with another scarf, first pulling it tightly between her teeth to hold in the stuffing then wrapping it around her head and back over her mouth to complete the gag. Now that she is all trussed up the challenge can begin! Chrissy struggles and squirms around on the bed trying to wiggle her way out of the tight bondage. After a few minutes she realizes that it isn’t going to as easy as she had thought! She starts to struggle more furiously as she knows her time is running out! However she still can’t manage to get free before he announces her 5 minutes are up and she will have to pay the penalty! 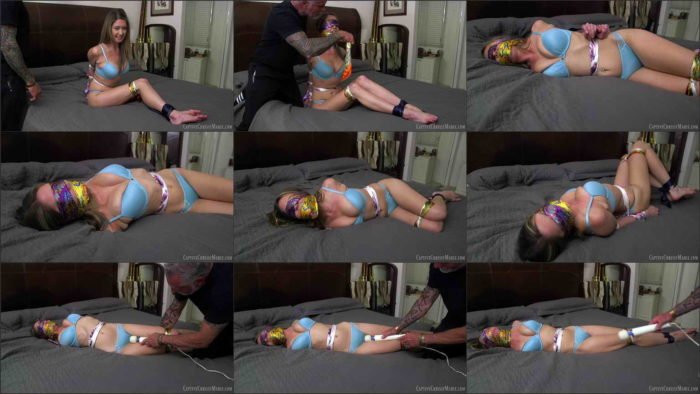