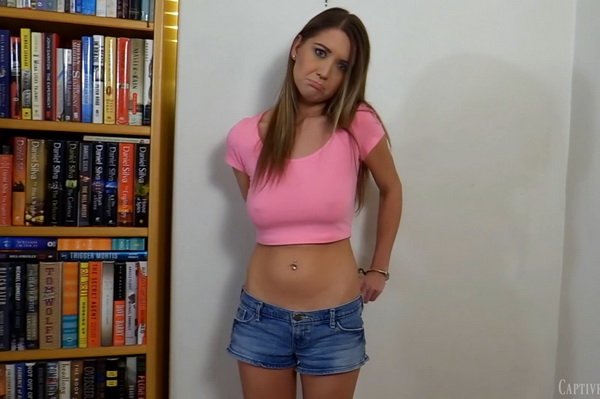 Chrissy answers the door to find a police officer who explains he is looking for a girl on the run and needs to come in and make sure she’s not being harbored inside since the girl was last seen in the area. Chrissy agrees and lets him in. The officer questions her if she knows anything about it and warns her that if he finds the wanted girl inside that Chrissy will be in big trouble. Chrissy denies knowing anything and maintains her bubbly and flirtatious personality as she tells the officer “I’m a good girl, I don’t do things that could get me in trouble”. The officer explains he is still going to have to search her and Chrissy obliges. She puts her hands up on the wall and the officer pats her down (pov). He moves her hands to the back of her head while searching her. When finished he turns her back around. He explains that he feels like he can trust her but he is going to take extra caution and handcuff her. This is when Chrissy’s demeanor changes. She goes from smiling and bubbly to scared and nervous. “Officer I promise I’m not doing anything wrong” she pleads. He tells her it will just be while he searches the place and as long as he doesn’t find anything he will take them off and be on his way. Chrissy reluctantly turns around and puts her hands behind her back. The cop proceeds to handcuff her as well as double lock the cuffs. Once cuffed Chrissy turns around and pleads again “Officer this is really unfair” as she makes a sad pouty face. He tells her to just wait there while he goes to check the bedrooms and turns her to face the wall again. 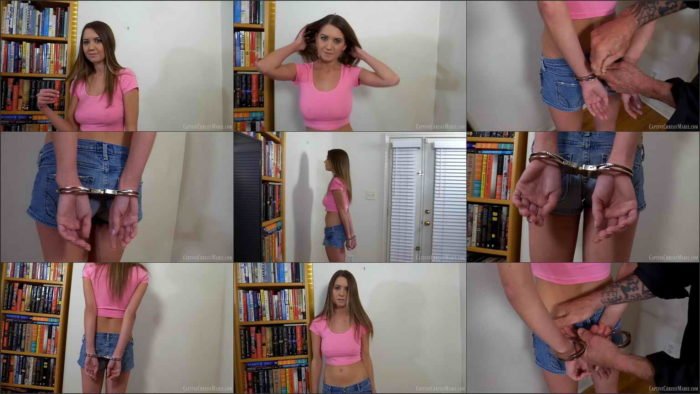