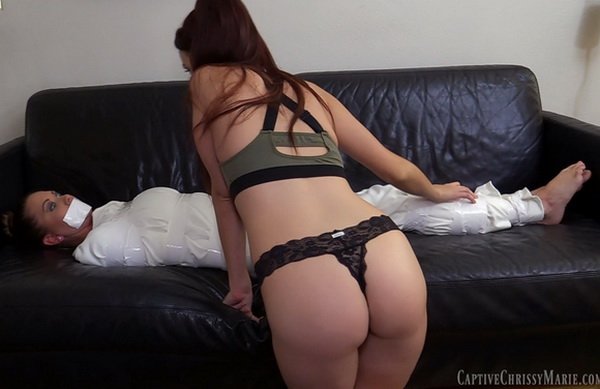 Chrissy and Lola are rival health club owners vying for dominance of LA’s competitive fitness industry. Lola owns a larger gym while Chrissy just opened a new one, which is still very small. The scene opens with Lola just returning home from a meeting with Chrissy who wanted to merge their two clubs. Lola, who is very self-confident, declined the offer. She’s thinking to herself (out loud) as she arrives that it was a smart move to reject Chrissy’s offer. Suddenly Chrissy sneaks up behind her and clamps a white rag over Lola’s mouth and nose, knocking her out. Chrissy lowers Lola’s limp body to the floor then stands over her smiling maliciously. Lola wakes up to find herself on her couch wrapped in plastic wrap and duct tape. She is now barefooted and in just her sports bra and underwear. Chrissy is sitting beside her smiling. Lola asks Chrissy what she is doing. Chrissy pinches Lola’s cheek and replies “taking over your business and you’re going to help”. She explains that she will force Lola to call her lawyer and tell her that she is going on vacation and that Chrissy will take over operations at the gym while she’s away. While Lola is her prisoner Chrissy will merge their two gyms, with Chrissy running both. Lola begs Chrissy to let her go and not to make her do this… 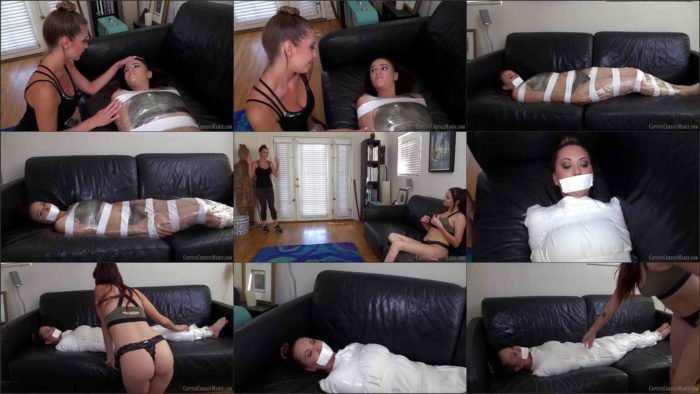