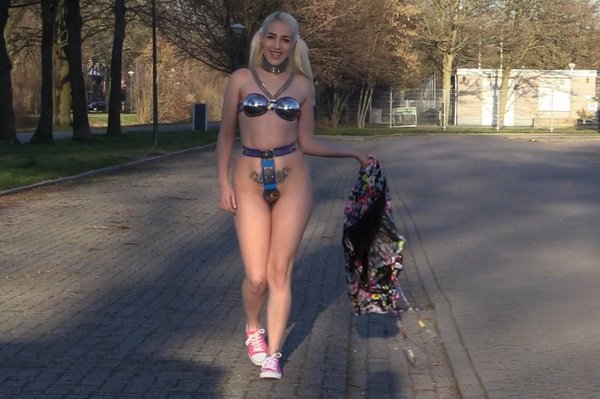 Liz Rainbow loves being naughty in public. She does not care. But I do. Which is why it is always hard for me to film outside, people are looking at us, me pointing a camera at a girl showing a lot of skin and shiny metal. But Liz thinks I should not care about people, and perhaps she is right. She went outside in a super tight chastity belt with two plugs inside of her. A five-ball long vaginal plug and a big anal buttplug. Those two plugs were moving around with every step she took, and there was barely enough space for both. The tight belt pulled everything very deep inside of her. It was amazing that she made this Challenge, last time (with a smaller buttplug), she could barely walk. Now she went in a car (the hardest thing to do in chastity), to a public place, walked around, got back in the car and drove all the way back to the studio with me! Liz was really flashing everyone and everything and soon we had a lot of attention around us. Guys in cars and on bikes were making extra rounds on the parking lot just to get an second glimpse of Liz flashing her belt and bra. People stopped, waved at us, one guy even followed us around. Liz eventually took off her dress entirely and walked across the parking lot wearing nothing but her plugged belt, bra, and collar! She is crazy! When we made it back to the studio, Liz was dying to get the belt off, the plugs were making her so wet and they were starting to hurt. She was so full inside! I am so proud of her! Next time we should go into Amsterdam with her, that will be a lot of fun! 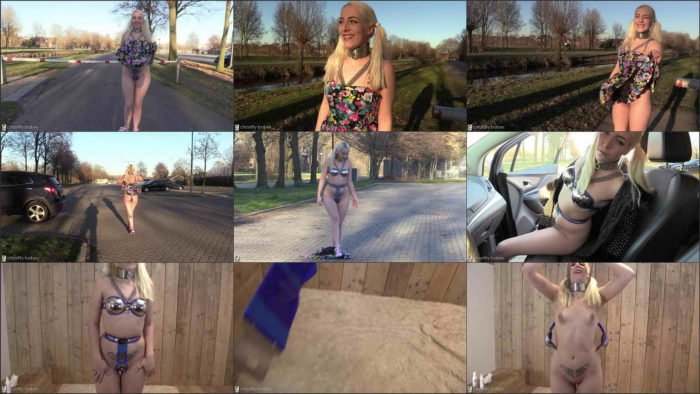