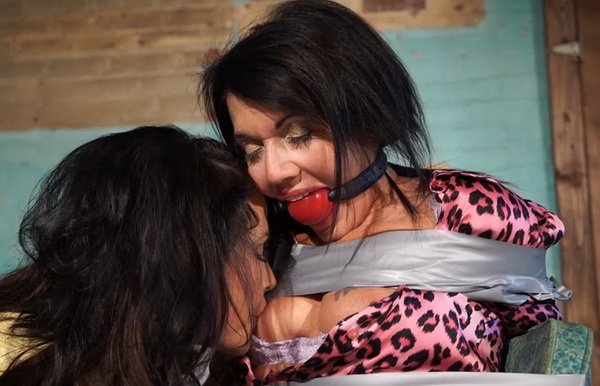 JJ and Gigi are mob wives. JJ’s husband has been missing for days. She has a horrible feeling that he has been murdered by Gigi’s husband, she figures some good old fashioned torture will get her old frenemy to spit out the truth. Gigi is groped standing up, set down in a chair taped up and chloroformed 6 times (total in the clip) while being interrogated. After being taped to the chair, ballgagged with tape eventually wrapped around it she is struggling and then we fade into Gigi and JJ standing up. Gigi is tied tightly with her elbows lashed together. Eventually JJs silk scarf is shoved in her mouth and layers and layers of duct tape are wrapped around her head. JJ is becoming more and more out of it since she had taken a xanex prior to the meeting with Gigi and she took a couple swings of vodka. She learns the truth from Gigi, her husband IS dead and he’s been dumped into the ocean. She stumbles away headed to drown her sorrows away in more booze and leaves Gigi there to rot..what will happen to her???
Similar video – Bondage model Jj Plush. Sexy booted bartender tricked into bondage before being robbed