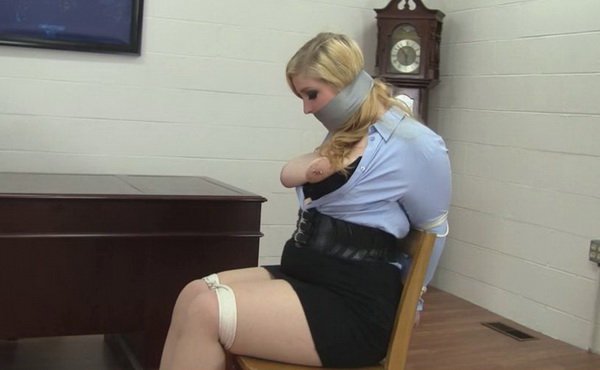 Jenna reports to Mr Big Boss’s office and only the day after her first bit of bondage with him. He’s had so much fun binding and gagging her previously that he’s interested in having a bit more time with her. Placing her arms behind her back her wrists are quickly bound behind her before another rope is added on her elbows pulling them tightly together behind her. With her arms bound Jenna seats herself in the chair in front of Mr Big Boss’s desk and recieves the large mouth packing he shoves into her willing mouth. A roll of silver tape is then pulled tightly around and around her headsealing her gag in. With her gag secured Mr Big Boss starts binding her high heeled ankles together before adding a rope above her knees further securing her helpless state. A few gropes before another rope is added pulling her wrists to the chair and then binding them off to her ankles.