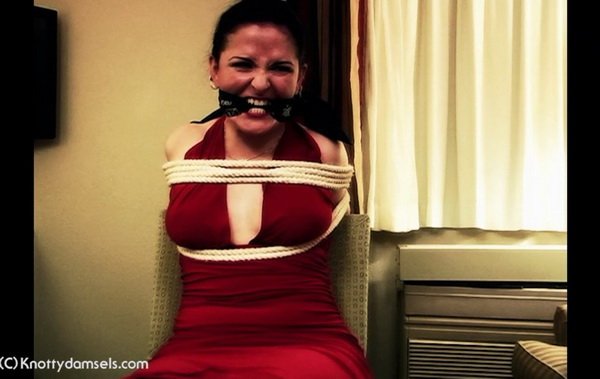 Caroline Pierce is a thief and con artist who is at a party posing as a socialite when she gets an invite to a room with the man she is intending to steal from. Already a little tipsy from the party downstairs, she sits down and has a talk with him, accepting the drink in front of her. Then, Caroline starts to feel woozy and then passes out.
When she comes to, she finds herself tied to a chair, her ankles tied, hands behind the chair, and roped around her breasts and torso. The man explains that he was on to her as the money he had he stole from his company. He is planning on leaving with the money that night but Caroline won’t be a part of the plan. He leaves but not before taking a blue bandanna and cleave gagging the angry Miss Pierce with it. Caroline grunts through her gag as he leaves. The bound and gagged thief is now angry at letting her guard down. Her situation is worse when a drunk co-worker stumbles in and mistakes Caroline’s plight for a kinky session. 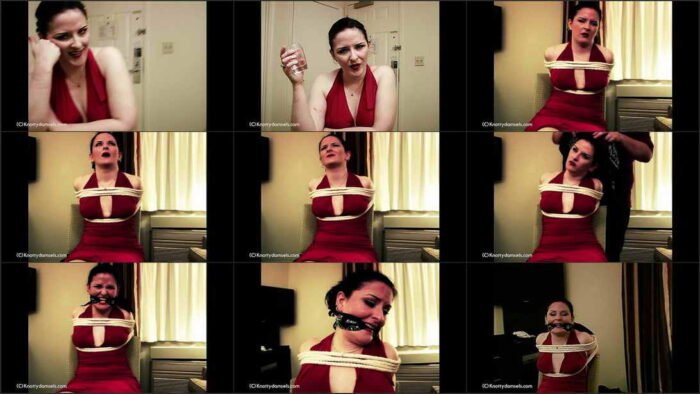 Knottydamsels Kristyna Dark bound to a chair and cleave gagged