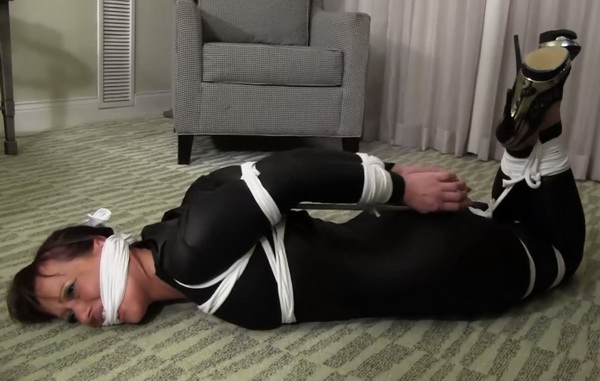 Yvette was sent to his room to steal some top secret files. But all of a sudden, she heard him walk in and had to quickly hide. But somehow Yvette made some noise and he heard her. When he grabbed her, Yvette put up a fight. He used the hotel phone to call for the authorities. But being in a foreign country, no one could understand him. Yvette also, only spoke German and he could not understand a word she was saying. The man had no choice but to tie her up and take matters into his own hands. As he tied her tight and with lots of rope, Yvette continued to shout at him in German. So once he had her all trussed up, he shoved a gag in her mouth and tied a rag between her teeth to shut her up. Yvette still refused to stay still as the man again tried to call the hotel desk for help.. But because he still could not find anyone that spoke his language, he again had to hang up so he could deal with Yvette. This time, he made sure, she was totally helpless. He tied her in a very strict hogtie with her hands pulled way up her back. Although Yvette could not understand him, she what was going to happen and she squealed loud through the gag as he started undressing her. All she could do was hiss and glare at him as she knew now that she was at this foreigner’s mercy. 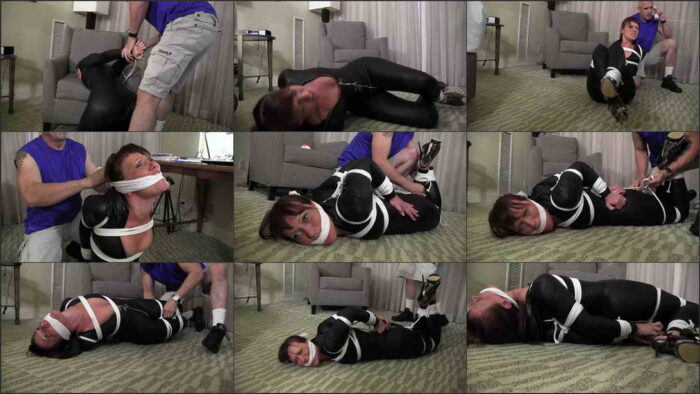