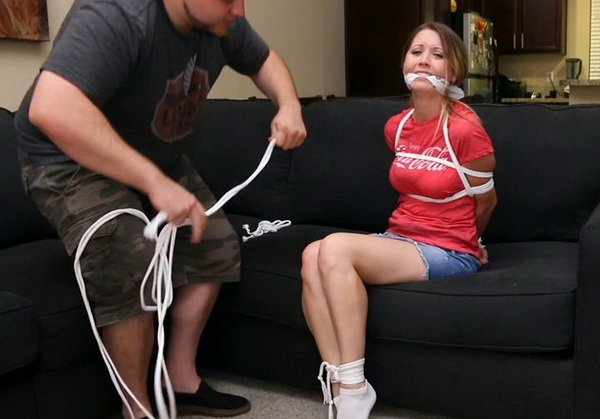 I’m stuck at home waiting for the TV repair man who should have been here hours ago! They gave me a service window from 12-5pm and now it’s almost time to watch my favorite show at 8pm and my cable is still busted! He finally arrives and I try to nice but I can’t help but vent on him at how angry and fed up I am with the company he works for! Then he goes on to tell me that the problem is going to take a while to fix, which means I’m also going to miss the next episode of the show, and that really pisses me off! As I continue to go off on him he opens his toolbox and pulls out a bundle of rope, telling me he has an idea about how he can get the work done faster. I question his intelligence, asking him how he thinks he can possibly fix my TV with a piece a rope! Just then he grabs me and begins tying my hands behind my back…
Similar video – Asian bondage model Asiana Starr. Chrissy Marie Gag Talk, Tied Up In My Turtleneck 3

Cleave Gagged Chrissy Tied Up Behind His Back