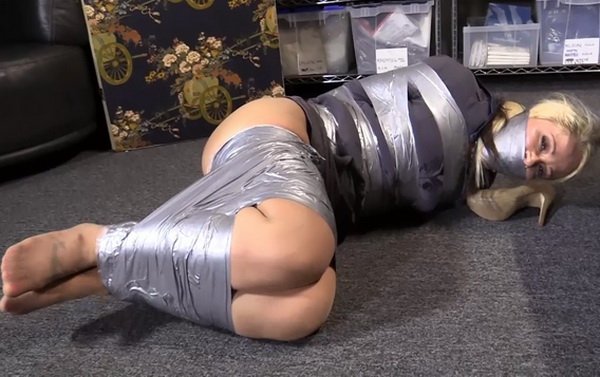 Adara is at her job and dreaming of a little excitement. She longs to be in tape bondage with a hand firmly over her mouth to keep her quiet. She dozes at her desk a and then finds herself standing tall in her heels being taped up by another suit clad woman in heels and hosiery. She is at ease and happy with the clear tape going over her fancy office attire. She is told to get used to her bindings hopping around and rolling around and trying it all out. She kicks some tape off of the desk which she is told to go over to, she picks it up with her mouth and when her binder approaches her she pulls off her colorful satin panties and shoves them into Adara’s mouth wrapping layer upon layer of clear tape around her head to keep her silent. Her eyes are huge and smiling. After making her way back to the couch she is covered in duct tape over the clear tape. Finally many many layers of duct tape go over her clear tape gag and then her legs are taped up so she won’t be able to hop away at all. She is caressed and spanked a bit and aside from the heat very comfortable in her uncomfortable bondage. 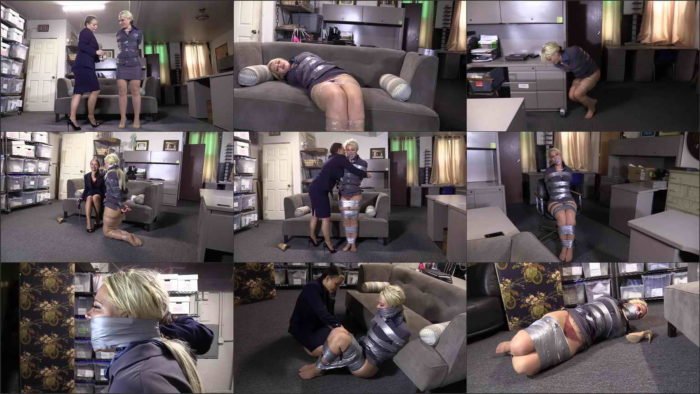 Adara Jordin bondage – I’ll be getting the promotion that I deserve at any cost!

Adara Jordin Bondage, You can’t dress like that in my yard!

Adorable Diamondly hogtied, captured cutie unties herself and makes a run for it