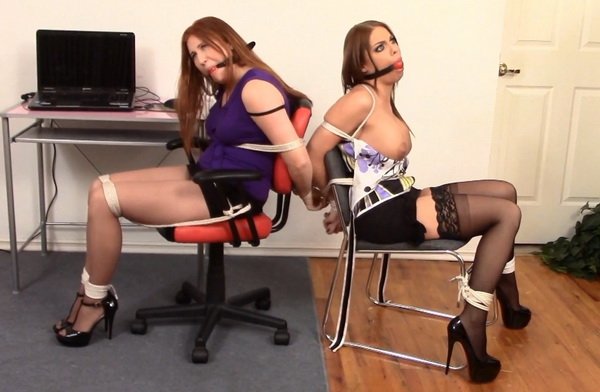 Now this bondage-filled tale of corporate espionage is bargain priced! Sexy secretary Cassidy Klein is taken captive after hours at the offices of the B & G Company. She tries to convince her captor that there’s nothing in the office worth stealing, but he ballgags the leggy brunette and leaves her alone to struggle while he searches for his unnamed prize. As her captivity continues, Cassidy is roped into an open fold-tie, then she’s bent over a stool with her miniskirt hiked up (allowing us a fantastic view of her perfect backside) and a detective gag is knotted over her ballgag.
Then sexy secretary Shauna Ryanne is grabbed by a burglar after hours in the B & G Company offices. He demands that she tell him the location of the “Black Omega” project, but she claims to know nothing about it. He cleavegags the curvy redhead and binds her in a classic position, all shown onscreen. Left alone, Shauna struggles in vain to free herself but her efforts are to no avail. The burglar returns and binds his luscious captive in an open fold-tie, promising to visit her again.
Later Shauna Ryanne is moved to a secluded office where she has a meeting with security specialist Britney Amber. After Ms. Amber tells Shauna they believe she was attacked earlier by the corporate spy “Vibert,” he appears and takes the lovely redheads captive. He makes Britney bind Shauna’s hands, then he thoroughly charties and ballgags both ladies. While Vibert continues his search for the elusive “Black Omega” project, the bound and gagged redheads make a futile attempt to free themselves before he returns. But their efforts are all for naught, and Vibert promises Shauna he’ll make her give up her secrets.
Britney Amber and Shauna Ryanne are taken to a conference room, roped up and cleavegagged. They continue to struggle in vain to free themselves, but they’re still helpless when their captor returns. He promises to do terrible things to poor Ms. Amber if Shauna doesn’t tell him what he wants to know. Shauna ultimately has no choice but to surrender her secrets, and he tapegags her before leaving them to claim his prize. The ladies struggle, but are still tied up when the villain returns. He unties Britney’s legs so she can come along with him, and he leaves Ms. Ryanne to be found tied and gagged… 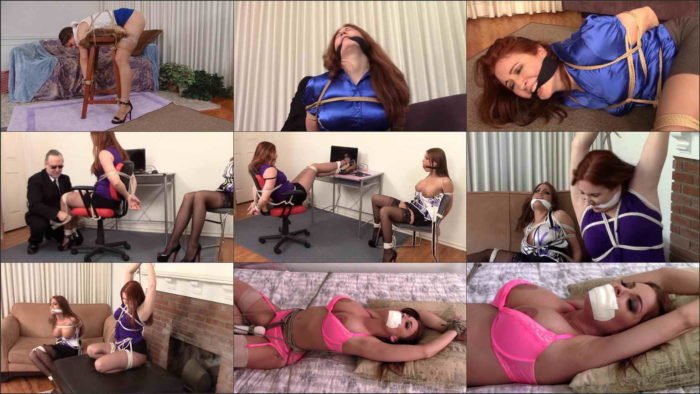