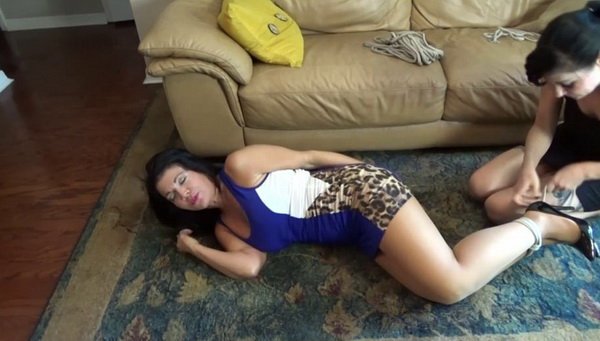 I’ve been rooming with brunette MILF Nyxon for a few months. She’s totally a couch potatoe and rarely gets out of the house without a push from me. Of course, I’m dating like a mad woman and I need privacy to bring men back to the house to fuck. I tell Nyxon I have a date tonight and ask her to get her ass out of the house – it’s the girl mode I explain – just do this for me Nyxon. Nyxon tells me she has a night of Netflix planned and has no intention of changing her agenda. Suddenly I feel a jolt of her taser rush through my body and I am down on the floor and Nyxon is roping up my legs. What are you doing girlie – you’re hurting me!! The dark haired beauty smacks my ass a few times and continues tying me up. She binds my thighs together and I beg her to stop. I need to see this rich guy tonight Nyxon and the bitch just zaps me again with her tazer. She rolls my limp body over and adds some rope to my arms securing them tightly behind my back. The obnoxious bitch puts me in a hogtie and then shoves a big rag between my lips securing it in tightly by wrapping layers of elastic bandage around and around my head. Then she has the nerve to settle in on the couch for her night of television using my bound and gagged body as her personal footrest while I struggle underneath her feet. [bondage-education] Latex Kitty Hogtied and in the Hands of her Mistress [bit gag, tied up]

Star tied up and gagged, Good thing my neighbor heard my muffled cries!

Fayth On Fire Tied Up, can’t move much at all