Home » Bondage F/F » [borntobebound] First time in a reverse prayer & then lots of rope on the girdle, gagged bound girl. Tara Tied tied up and gagged 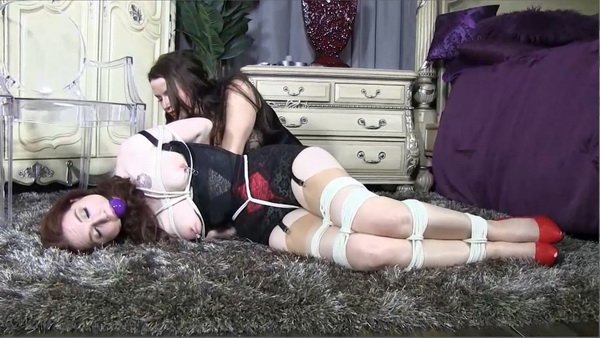 Tara is one of those models that actually enjoys bondage. She said someone once put her in a reverse prayer but she needed out immediately. I thought it would be fun to give it a try.I don’t force her arms up really high because I wanted her to be able to stay in it. I ask her a bunch of questions (perhaps a little too personal) as I tie her legs. Then it is time to shut her up so she gags herself with a big purple ballgag. She gets nipple clamped (2nd time ever) and struggles in her reverse prayer for us. Then I untie her arms and move on to an elbow tie. I have her gag herself with panties and vetwrap. Then I get to work adding lots and lots of rope to her arms, plus a crotch rope, cinching them to her body and tying her thighs down too. This time I regag her stuffing her mouth and then wrapping duct tape around her head. She gets a snug hogtie. I tape up her fingers leaving her long red nails exposed. I turn her on her side and add some clothespins. I take some photos of her (which I will post soon)..and poof the end. Our outfits are from girdlebound.com.