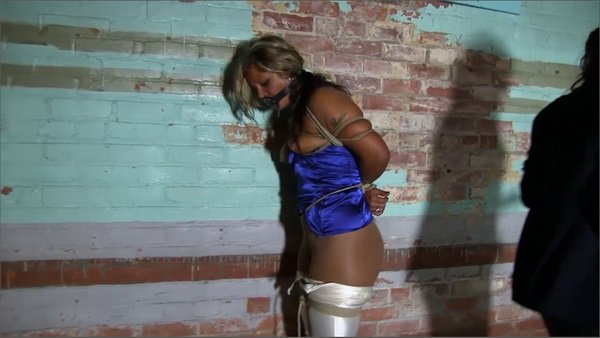 The corrupt security guard finally gets the chance to shoot a girl for the studio she works at. There was a huge store the day before and the studio flooded out and a lot of the highways were still closed. They emailed the model, but like a lot of models this girl doesn’t get up in time to check her email before the shoot. The guard is there waiting all dressed up just in case the girl arrives. Much to her delight the girl does arrive and she looks incredible, tan and blond in tight shiny heels and satin top. Good.there is no stylist today but none needed. She is ready to go. The guard tells the girl that everyone is running late and it will be some time before the shoot starts, but then pretends to get a text message saying that the roads were too bad and just to shoot the set without them. The guard tells the girl she will still get her full modeling rate so she is ready to go. She gets a metal fiddle around her neck with her arms in it. She gets a little white ballgag strapped in tightly. She gets a pair of leg irons and her legs are tied off to posts and then ring on the fiddle is tied off to the ceiling so she is bent backwards while JJ takes her pictures. Then she is led over to a hammock. Her cuffed ankles tied up and that fiddle tied off above forcing her head back once again. Her nipple clamps are removed and put back on with rope attached. The ballgag is removed and a big blue bandana is shoved in her mouth with vetwrap around that. Then the rope attached to the clamps are used to swing her in the hammock. The girl doesn’t quite understand because there doesn’t seem to be a video camera running so why the extra abuse when the camera isn’t snapping? She is led away from the hammock to the wall and told to bend over and she gets spanked and is forced to count. The neck breaking metal fiddle is finally removed and she gets a boxtied. The gag is taken out and the girl decides to ask JJ what her usual job is at the studio if she isn’t ever on camera. When she replies that she works in security the girl gets upset and wants to go home, but it is too late and JJ promises to pay her the rate and continues on. A little plug gag is stuffed in her mouth and the ropes are piled on. Then some black panties are stuffed in her mouth and a microfoam is used as cleave gag. She gets a hogtie, with her feet bound into it. A white stocking cap is put over her head, pulled back, pulling her nose back like a little piggy and making her gagged face take on the shape of an oscar fish. JJ goes away for a bit and then comes back, pulling the stocking cap tighter for some final photos of Adara…