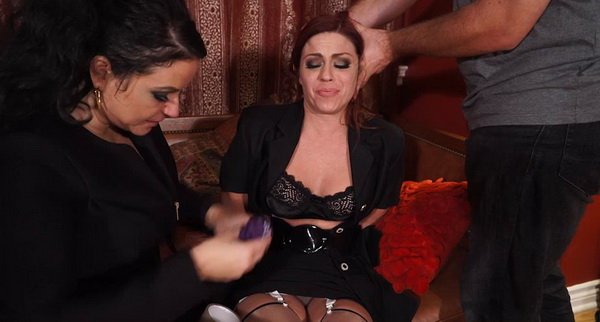 Bounty Hunter Sarah Brooke thinks she has things under control. She cuffs JJ up and leaves her to make a call, but JJ was expecting her so her partner in crime is waiting to get the bounty hunter. He brings her in with her wrists tied. He ties her up more and JJ reaches for her keys and uncuffs herself. The pretty lady gets her mouth stuffed with a bandana and clear tape. The duo are obviously out of their minds. The woman gropes at her and they stand her up to check out her underwear. They let he struggle for a bit before hogtying her. The poor dear did not want to lay on her boobs so she was hogtied on her side and when she rolled over the tie was tight enough that her precious boobs were not squashed on the floor. She struggles about and mmppphhhsss angerly as the duo takes off.