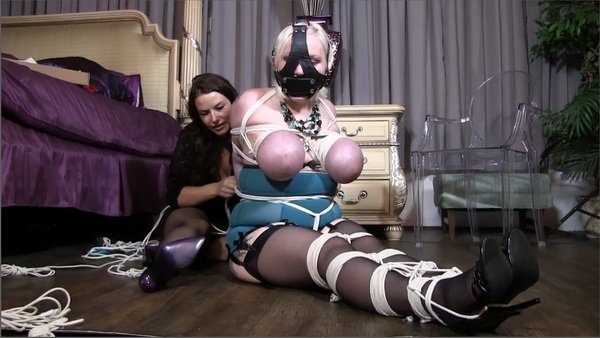 Vicious Vamp and those magnificent breasts are back. I tie up her lower body and have her try on various gags, a small ballgag with steel strap, a leather gag with a ball in it, a panty gag with vetwrap and then a bright red harness gag. She ties up her huge boobs. She does it even tighter than I would.so I’m in the clear. I have her try to clamp them but she can’t, it is fun to watch. I wrap more rope around her upper body and boobs and then I put a big leather harness gag on her. It has a “penis attached” After a bit I remove the penis and shove panties in the hole and then use electrical tape to keep the panties in. She gets hogtied tightly. She can’t stand laying on her boobs tied up that tightly so I tip her over. She purrs while I play with her crotch rope and boobs and then it is time to let her out. I turn the camera back on as her boobs come out of the bondage. They look so tender. I give her some soothing lotion and she rubs it in.