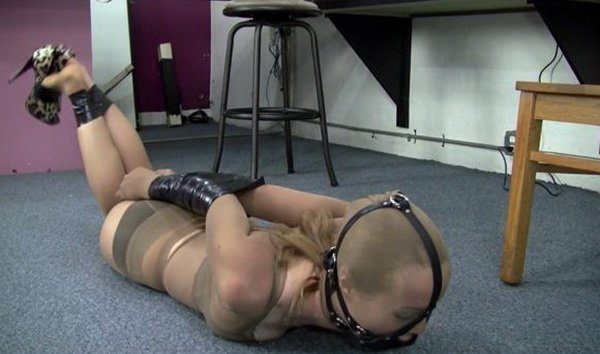 Leggy Madalynn Raye was serving as Mr. Big Boss’ entertainment for the afternoon. She was wearing pantyhose with a matching nylon top. Spirits were high as Mr. Big Boss started to tape Madalynn’s arms tightly together. He used wide electrical tape and wrapped from her wrists up to her elbows, every wrap brought her arms closer together. Madalynn started to grimace as her tape bondage proceeded to tighten. Next, Mr. Big Boss wanted to pull a tight stocking over Madalynn’s head. With a few failed attempts, I came into the office and pulled it over her face, squishing her nose and eyes against the silky nylon. Mr. Big Boss took a pair of safety scissors and cut a hole at her mouth. The nylon spread around her lips, giving it a very interesting look.