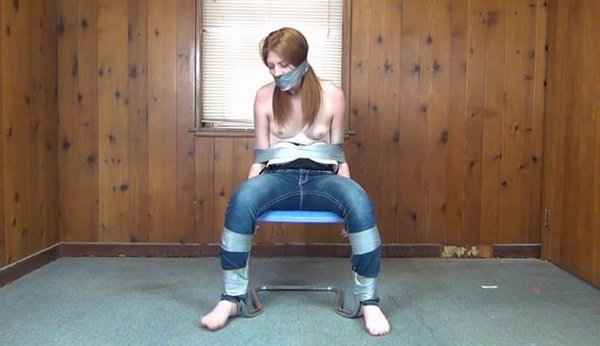 Red head Madalyn gets a moth pack and duct tape wrap around gag as she sits tape tied in a chair. Her arms at her sides and taped as well as her knees and ankles taped wide to the front legs of the chair. Her captor has to run a few errands as she sees this is her chance for escape. She works and slides the chair around trying to knock down the blinds in a nearby window but fails. He comes back to check on her and adds more layers of tape wrapping to her gag, her cheeks bulge over the top of the bands. Again he leaves as she notices a slightly opened door. Madalyn uses her toes to open the door further only to find its a dead end. Again she is checked in on. Having enough of her escape attempts she is drug off to get a more harder bondage.