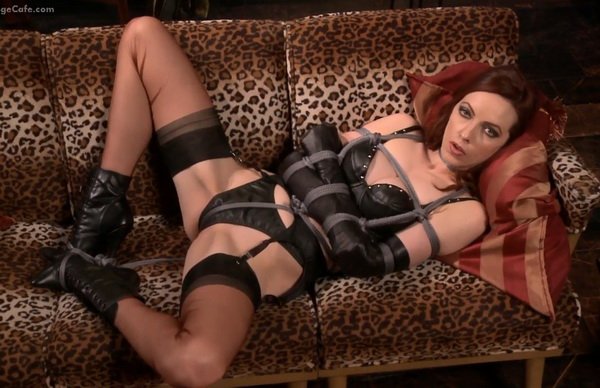 Emily blows it out of the park in this very sexy scene. She is just so honestly turned on, and completely into her helplessness, that it just melts the screen. Dressed in leather and copper colored fully fashioned stockings, she does a little leggy posing and then after the ropes come out, her mood changes and things get very steamy. She does love to rub against that crotch rope, and then after the vibrator is first placed there, she has to admit that if she isn’t careful, she’ll come immediately. Jim enters and makes sure she has no choice in the matter. There is something that you all should know about Emily: She really likes to her feet and legs to be uncomfortable. Why? I have no idea, but it is something I’ve known for years. Those boots she is wearing are, as I’ve been told, very uncomfortable. So just wearing them made her happy, and then the way her feet were tied, made it even better. Jim does eventually have some pity on her and removes them. Emily quickly explains that she really wants her feet untied and that she was getting off on the boots, so Jim ties her feet. Emily asks to have her stocking feet played with and Jim obliges which makes Emily pretty much instantly come. She obviously loves to have her feet played with while she is in bondage. By this point in the proceedings, she is ultra sensitive. Jim lays the vibrator against her crotch, turns down the lights and leaves Emily to struggle a bit more on her own. Just yummy. 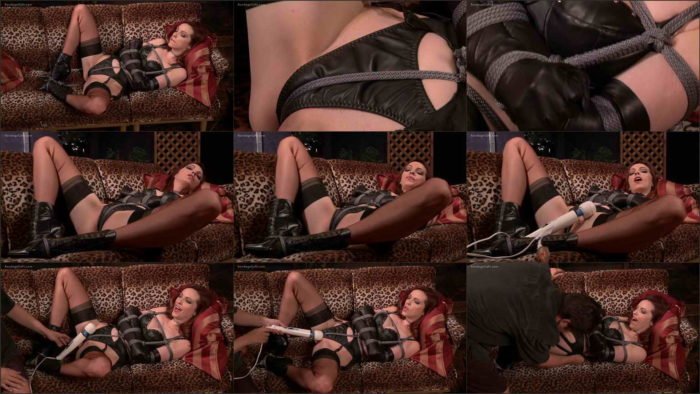