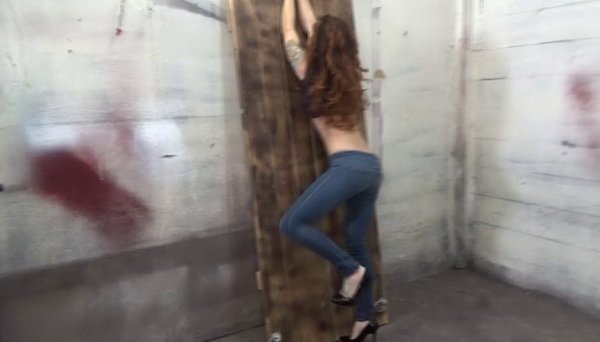 Sexy model Shelly Dare shows up for the modeling gig wearing skin tight denim jeans, a tiny crop top and sexy stiletto high heels. She’s a total bitch right from the start telling me to hurry up with the photos since she’s in a hurry to get to her next gig. She’s such an uppity snotty brat girl that she quits posing mid-stream and storms to the door in anger. I call out to Jim Hunter to grab her ass and get her back inside. He rushes out and returns with the haughty model’s arms brutally bound behind her back-his signature tie-her elbows welded together as if they’re glued. He forces her down on the couch and I bend over to bind her knees together and straddle the bimbo and shove a big ballgag into her big uppity mouth silencing the bitch. We force her to hop out of the room in her bondage, but when we tire of this, Jim lifts and carries her outside and puts the bound beauty into the back of the pickup and off we go … the next she knows Shelly finds herself being dragged into an abandoned building and forced up against a board. The next thing she knows her arms are being stretched and bound overhead to a ring in a board. The poor things twists and struggles and cries to be let go, but we shove a rag between her lips and seal it in good and tight with duct tape. Uppity bitch can’t complain noow!!! Jim ties her ankles tightly together and we watch her struggles and cry. Guess it doesn’t pay to be a bitchy model, does it Shelly??