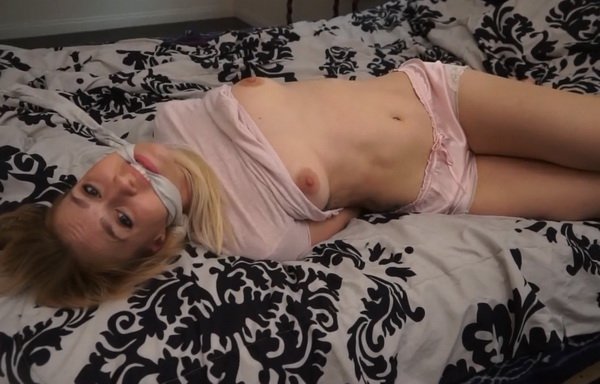 As “The Stephens Files” begins, we learn that Paul Stephens is a covert operative who’s appeared in a number of American Damsels videos. Yet, as shown with a series of cameo flashbacks, he always seems to be recognized, despite being masked. The sinister agent has now been given a new assignment: to recruit unsuspecting women into the world of… fetish modeling! His first target is blonde beauty Jolene Hexx. In this POV scene, Paul sneaks into her bedroom, and his prey suddenly awakens as he draws near her. At first Jolene is angry and defensive, but then she becomes terrified. When we next see the barefoot babe, she’s cleavegagged and hogtied on her bed. She pleads with her captor, and rolls around, trying her best to squirm out of the ropes. But there’s no escape for Jolene, and soon he pulls up her crop-top T-shirt to expose her luscious, all-natural breasts. Then her silky shorts are pulled down to her knees, revealing all of her feminine charms. The helpless captive whimpers and begs for release through her gag, but her cruel captor has other plans for Jolene!
Paul’s next quarry is stunning teacher’s assistant Bella Rolland. She’s working in an empty classroom, and is surprised to look up and see the POV intruder. The leggy beauty is tapegagged and bound hand and foot on top of her desk. Left alone, she slips out of her high-heeled shoes and hops over to the chalkboard to write out a desperate, single-word message: Help! Bella then hops to her desk to look for anything she might be able to use to free herself. She goes through all the drawers and finds nothing, but then she looks up to see that Paul has returned! The gorgeous brunette is then hogtied on top on the desk. She struggles and squirms, but Bella can’t get loose. Paul eventually returns to open up her blouse and reveal his sweet captive’s delectable breasts, and he unbuttons her skirt for a peek at her lacy panties. Once again, Ms. Rolland slips out of her heels but not her restraints. Her evil captor soon grows weary of her escape attempts, so he toe-ties his sexy captive, and brutally binds her elbows together. Escape is now impossible, and Bella realizes she’s completely at his mercy. 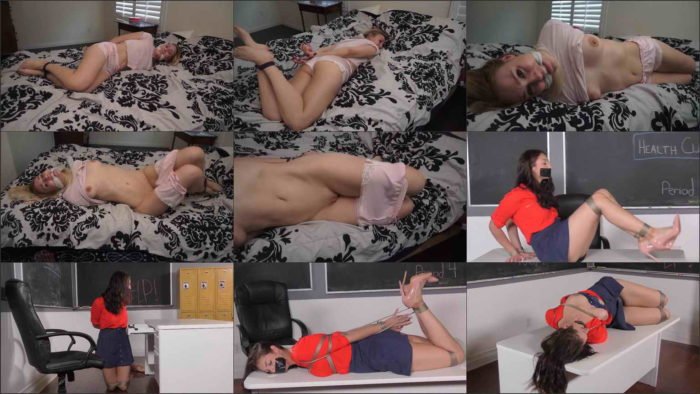