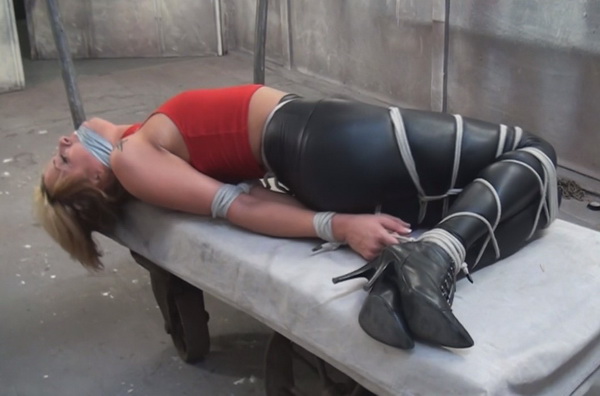 Leggy blond Bella is dragged into the lair by the Hunter with his hand clamped tightly over her mouth. With her elbows already slammed together behind her back and tied in ropes. She can do little to resist as he pushes her down onto an old industrial cart. Her mouth is open and an old rag is stuffed between her teeth and filling her mouth spreading her jaws wide open. Duct tape is pulled between her teeth and then wrapped tightly around her head sealing the wadded rag deep inside her mouth. She can do little as he grabs her booted ankles and binds them tightly together, the rope is then wound up her calves and around her knees fusing her long lean legs tightly together. He pulls her wrists together and ties them tightly with rope then stands her up on her feet. Bella can barely balance on her bound stiletto booties as the Hunter ties a rope around her belly then pulls it down between her legs. She can feel the tight rope violate her pussy shoving her spandex leggings deep into her crotch, giving her camel toe. The crotch rope is pulled up between her bound wrists then jerked tight pinning her hands to her ass, and then run back between her legs and between her spandex covered pussy before being tied off around her belly. Bella is pushed back down onto the cart but with her wrists tied to her crotch rope she can’t sit up without driving the ropes deeper into her pussy. Bella looks up with pleading eyes in disbelief as he pulls out more rope. He ties the ropes around her thighs, just under her ass cheeks and then weaves the ropes down her thighs to her bound knees. Bella can barely move with the brutally tight ropes pulling and crushing her limbs so tightly together as she watches the Hunter leave her alone on the cart. She tries to move but the damned ropes are so tight that she can barely even bend her legs and her arms are totally useless and immobilized. The she hears the Hunter return and can’t beleive he has more rope! He ties the rope between her bound ankles then pulls her ankles up to her hands, she moans and groans into her gag as the ropes around her legs tighten and bite deep into her spandex covered flesh. He attaches the rope from her ankles to the crotch rope and pulls it tight leaving her in a brutally tight hogtie. He rolls the cart and then leaves again with poor Bella sobbing and crying on the cart clawing at the ropes in a desperate attempt to find any knots and looses at least one of the ropes. But there is no hope of untying any knots with her numb fingers even if she were able to reach one. 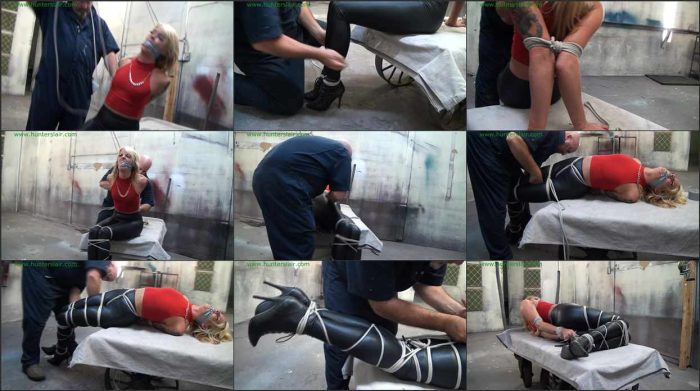 Natalie Charm – Nosy reporter gets too close to the story & ends up a bound sex slave, jimhunterslair

Mia Hope – Please tie me up Uncle Jim so I can show you what I learned in college, jimhunterslair