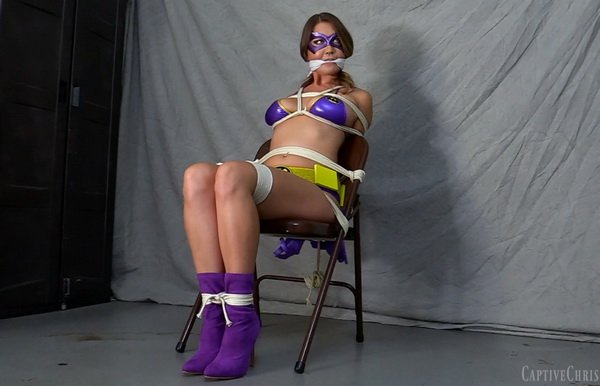 Batgirl Chrissy has been asked to do a story/photo shoot for a journalist (who’s actually a supervillain in disguise!) She arrives dressed in her sexy bikini and starts out by doing some heroic and cheesecake poses. The photographer then asks if she would mind posing for some pictures while tied up because superheroines always end up getting tied up. She is reluctant at first but ultimately agrees and the camera fades to black. When we return Batgirl is sitting in a chair and on the floor next to her is a pile of rope, a pair of handcuffs, and a white cleave gag. She ties her ankles together (side by side, not crossed) and then ties more rope just above her knees. Next she cleave gags herself tightly between the lips and put the handcuffs on behind her back. She sits there for about a half a minute while the photographer takes more pictures. Then he asks her if she can stand up for some pictures and she obliges. Finally she sits down again and asks through the gag if that’s enough pictures. The photographer starts approaching her (camera POV) and she gets a worried look on her face as the camera fades to black. Now we see Batgirl has been tied to the chair with a lot of rope wrapped around her and her cuffed hands tied down to the chair as well. By now she’s figured out it’s a villain who’s captured her. She mmmpphs in fear and frustration as she struggles and squirms helplessly in her bonds. 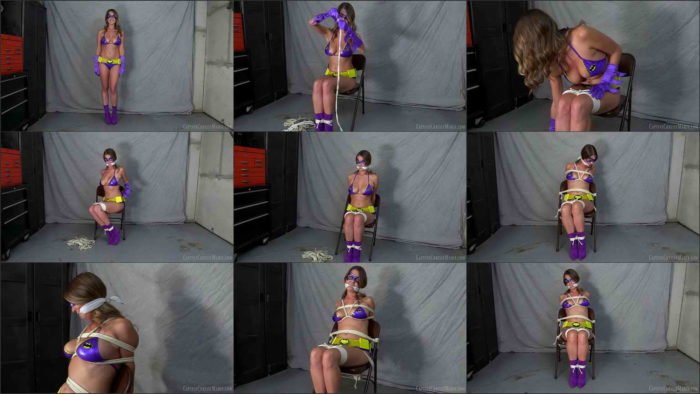 Hannah A Different Kind of Christmas Story part 3 of 3

Anita’s De Bauch Bubble Breather, handcuffs and leather straps to secure her legs and waist to the chair