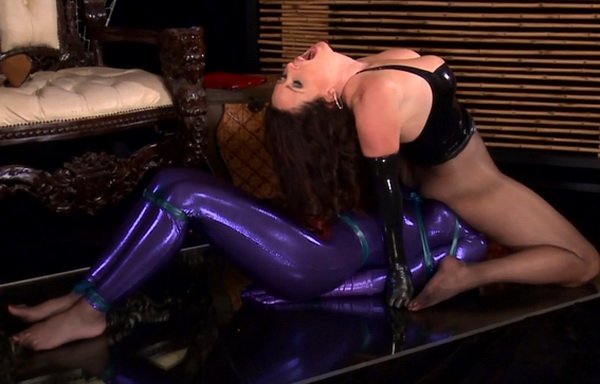 Batgirl (Angela Sommers) awakens to find herself tied in Black Widow’s (Christina Carter) “elasto-straps”. They are fiendishly stretchy and sticky straps that are guaranteed to keep her securely helpless. Black Widow begins to play with her prey but finds Batgirl unenthused to say the least. No matter. Black Widow pulls out her patented “Eroto-Toxin” and pokes Batgirl with it. Within moments, Batgirl’s struggles become slower and more sensual. Black Widow explains that her Eroto-toxin will turn Batgirl into a sex slave. Batgirl grinds against the elasto-strap between her legs as Black Widow pushes her stocking foot into her face. Mmmmm, Black Widow climbs on top of Batgirl, gliding her body up and down Batgirl’s helpless frame. Batgirl is becoming more excited. Excellent! Black Widow slides up pushing her pantyhose crotch in to Batgirl’s face. Batgirl gets to work. Black Widow turns around so she can have Batgirl’s pussy at the same time. Who says Black Widow doesn’t share? The vibrator comes out and Black Widow brings Batgirl to orgasm. She then turns the wand on herself. She masturbates as Batgirl struggles. Ahhhh, so much pleasure! Black Widow’s kiss brings Batgirl back to earth and the eroto-toxin wears off. Black Widow offers Batgirl a chance to join forces, but she declines. Very well. Black Widow unmasks Batgirl revealing Barbara Gordon!! Black Widow realizes the opportunity to get rid of Batgirl AND destroy Gotham’s police commissioner at the same time. Barbara is left to struggle in the elasto-straps as Black Widows goes off to prepare her demise. 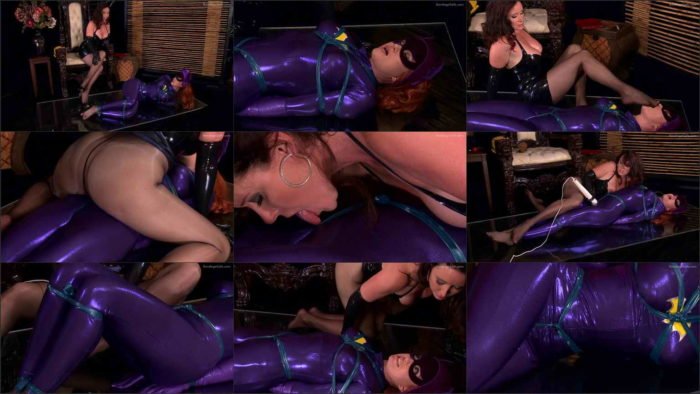