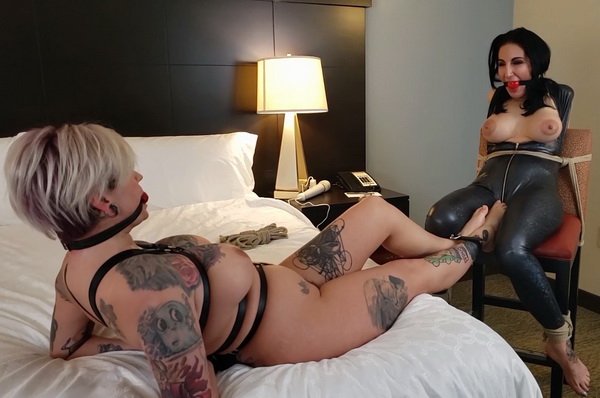 In Part 1 of our story, beautiful scientist Ava Minx had been subdued by a sexy black haired operative intent on stealing the mind bending aphrodisiac Ava had developed. Despite her orders, Raven injected the helpless scientist and once the serum had taken effect, she subjected her lust crazed to an intense session of bondage and orgasms until the buxom blonde had hopelessly imprinted on Raven, willing to do anything as long as her lust would be stoked. Unfortunately for Raven, her employer arrived, and furious to learn his orders had been disobeyed, he overpowers the disobedient operative. Now, in Part 2, Raven awakens to find herself bound to a chair, her tits exposed and ball gag filling her mouth. Her disorientation is broken by the sounds of Ava, moaning helplessly and lustfully in the hands of the big boss as he fondles her nude body. The body harness she wears keeps her nicely secured, and the leather strap riding up into her pussy is driving her mad with desire. Once the big boss notices that Raven is coherent, he quickly injects her with the remaining dose of the serum!! Raven struggles like mad, knowing that with every passing second she will be one step further down the path toward becoming a subservient helpless love slave with no cure and no will of her own! Mr. Big explains that she’s going to spend the rest of her life in an asylum, used as a sex toy for any and all who want the privilege!…