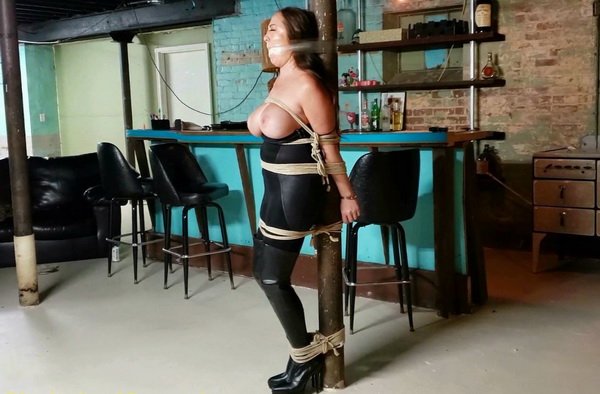 Nyssa had been working nights tending bar to pick up a few extra dollars, and she quickly grew tired of the barfly who spent every evening glued to a stool, staring intently at her. When closing time came, she told him he did not have to go home, but he could not stay there. Well, he certainly wasn’t going home, and neither was Nyssa! Seems her unruly barfly planned to rob the place! The man pulled a weapon and made her stand against a pole where he handcuffed her hands behind her back, keeping her in place while he found more materials to better restrain her. She was making far too much noise, so he stuffed a huge red ball gag into her protesting mouth, forcing her to begin drooling immediately! As he added more and more rope to her struggling body, he delighted in listening to her garbled, gurgling protests! Once she was firmly fixed to the pole, the man decided to have a bit of fun by pulling her top down and baring her huge tits! Grunting in fear and humiliation, the exposed bartender could not help but drool on her large breasts. Delighted at how the bitchy bartender was completely helpless, the man decided to give a little payback for the way he had been treated by pulling out a few clothespins and clamping them on her huge nipples! The busty Asian bartender shivered in pain, the clothespins wiggling and jiggling with every move she made! Finally the man realized his time was growing short, and he needed to leave… 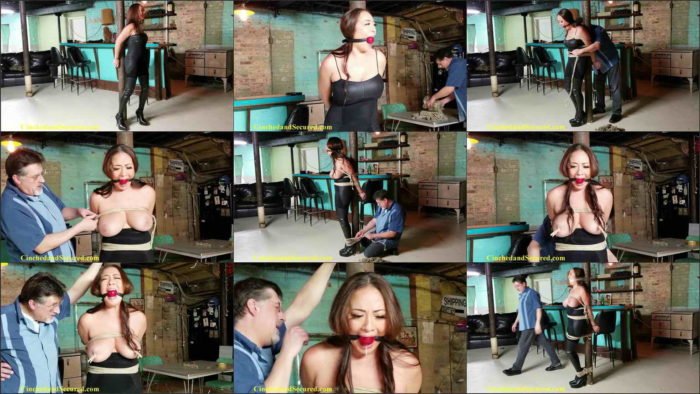