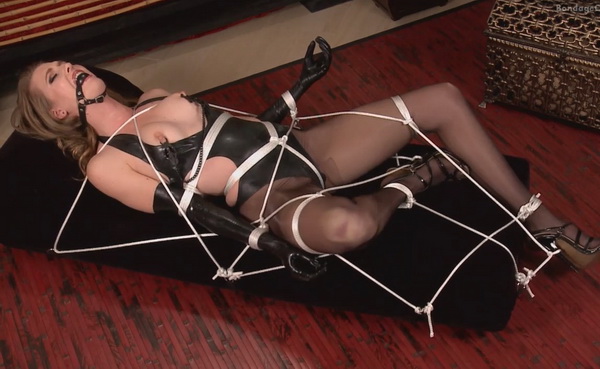 This very alluring Ashley Lane is back, dressed in a particularly interesting piece of bondagewear from the wonderful folks at www.fetissolatex.com. Honestly, I’m not normally a big fan of costumes that have the sides cut away, but this one, I must admit really did look great on Ashley. Add the gloves, the silky black nylons, and six-inch high stiletto heeled sandal and Ashley really was ready to play.
As anyone who has been here for any period of time will know, Ashley does, indeed, love to play. Especially when the play involves her being held helplessly captive in tight ropes. On this particular day, I wanted to do something a bit different. I pulled out the liberator (a piece of bondage furniture) and layed her down on it. There are various attachment points that are woven quite securely to the liberator, so I had loads of choices. I had a basic idea in mind however. My goal was to tie her into a web of rope that she could struggle in, but she could not get out of. I tied her wrists and ankles and even tied in her shoes.
I also wanted it so she could really try to reach at various things, but that she would not be able to reach her breasts or her crotch. Something that actually took a bit of work. As it happens – and the pictures and accompanying video will attest, I succeeded. Nipple clamps were added that she could just barely touch but not remove, and she couldn’t reach the vibrator that would soon be making her squirm even more… Enjoy. Ashley certainly did. 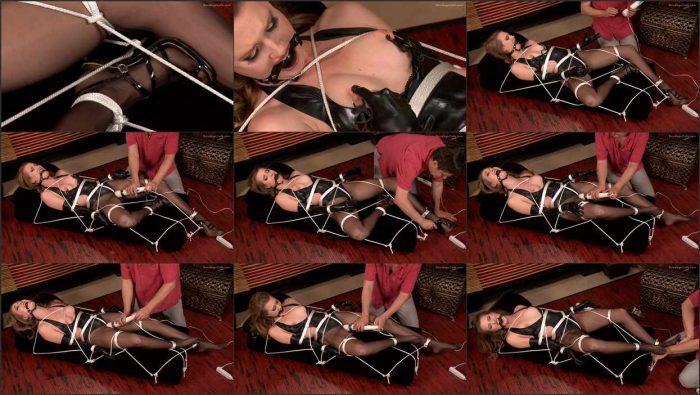