The deal is done and Ariel, Lucy and Zoe are ready to collect the diamonds and transport them back to their company HQ. They confirm with their counter-parties not only what the three of them look like but also what they are wearing for additional security. But- Oh my god, who is this? A robber! It’s a heist! The girls are held prisoner while he sends his accomplices to complete the deal and steal the diamonds right from under the nose of the sellers. Unfortunately, that little detail of what the girls are wearing adds a little extra complication- he’s going to need their clothes! So he demands the girls to strip down to their underwear so his accomplices can wear the right clothes! Left standing in their sexy black lingerie, stockings and suspender belts he then ties each girl up tight in restrictive ropes before mouth-stuffing and over-the-mouth gagging them with silk scarves. He leaves them to struggle while he gives the clothes to his accomplices. Ariel, Lucy and Zoe struggle and squirm around on the floor, desperate to reach a phone or escape before he gets back! Lucy manages to spit out her mouth packing, but before she can loosen any knots with her teeth, the robber comes back into the room and discovers that she has ungagged herself. He needs them held helpless for at least a couple of hours so he can complete the heist, so he has to tie them even tighter!… 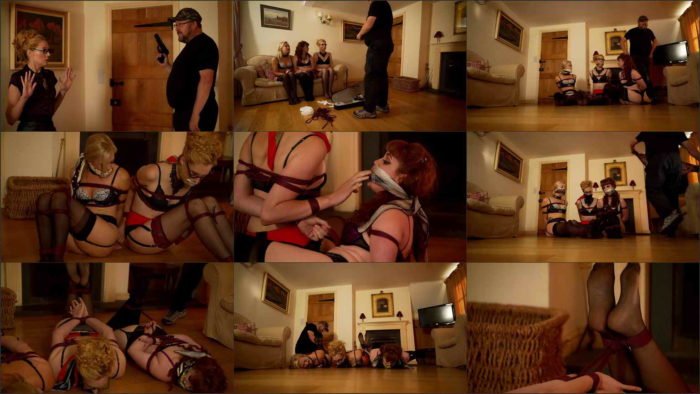