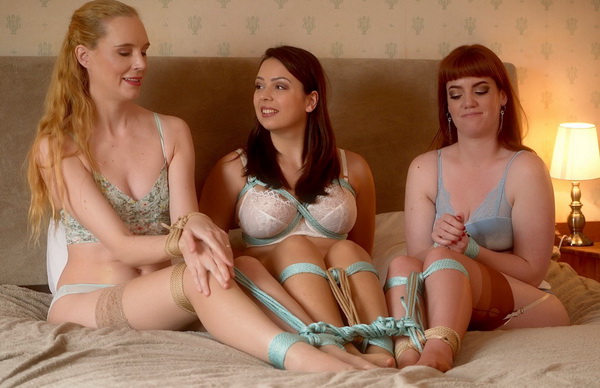 Video (17:16 minute video) starring Alicia, Ariel Anderssen and Zoe Page added 5 January 2022
Battling social media influencers Ariel Anderssen, Alicia Kitten and Zoe Page have had a few ups and downs but now they’ve got through it and they are all friends again. They’ve even got sponsorship for their bondage channel and they’ve been sent a great pile pile of rope to play with. Now they need to really get to grips with being able to tie each other up. They decide to start with ankles and knees. They can do it on themselves to get started….
The three gorgeous girls chat away as they do self-bondage on themselves, wearing sexy lingerie and tan stockings as they get themselves tied up. They help each other out tying at knees, Alicia is a bit of a rope newbie but her friends help her get tied nice and snug. They decide to call themselves the kinky three. Now, what to do on their top halves? Ariel ties Alicia in a rope chest harness while Zoe and Alicia add some decorative ropes that turn into a way of tying them to each other. Then it is time to tie everyone’s hands – Alicia’s behind, Zoe and Ariel in front. The girls are working as a team to deliver a sexy bondage show to their lucky viewers! 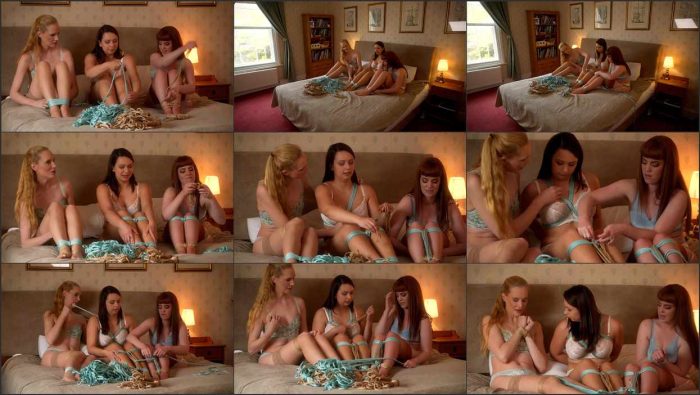