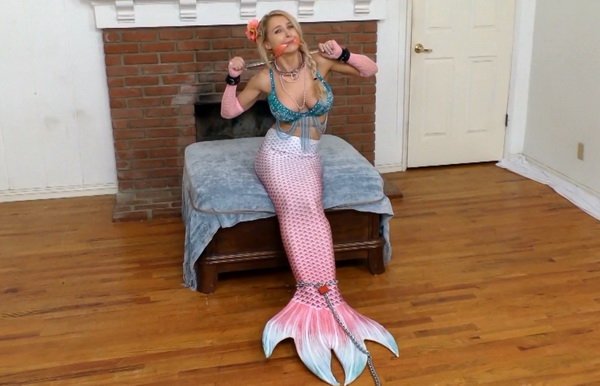 The spectacular video is now bargain priced! At the scandal-plagued American Damsels News Network, the search is on for a new C.E.O. to help improve their tarnished public image. Maria Jade has all the qualifications they’re looking for, and they bring her in for a interview. But the old habits are hard to break, and so they test the gorgeous blonde to make sure she has the loyalty and dedication required for the position. Ms. Jade questions the necessity of their peculiar interview methods, but she must play along when she’s bound hand and foot. Maria is then bandana-gagged, and she struggles and squirms, her short skirt rides up, and before long her future bosses decide to expose her lovely, all natural breasts. But her interview isn’t over that easily.
Maria is taken to a discreet apartment owned by the network to continue her interview. The adorable executive is dressed up in revealing lingerie, barefoot, ballgagged and frog-tied on the bed with a powerful vibrator roped into her hands. She knows the only way they’ll consider her for the C.E.O. position is if she does their bidding, and she uses the Hitachi to bring herself to a humiliating orgasm for their depraved entertainment.

Then the network executives learn that one of their reporters (Alix Lynx) is, in reality, a mermaid. They suspect she may be up to no good, so they’ve taken her captive and made her transform into her true shape. Alix is roped up, with a chain locked around her tail. The blonde beauty ultimately confesses that she’s working for the government, and she’s investigating their collusion in polluting the oceans. Alix is scarf-gagged while the evil network executives decide what to do with her next. The sexy mermaid’s captors choose to make Ms. Lynx the focus of a sensational exclusive story. They take away her top and re-tie her in a “mermaid tie” for their broadcast, and she wiggles like a fish out of water, moaning through her cleavegag as she ponders what will happen to her now.
Next in “True Bondage Tales” we have the opening episode entitled “A Cooperative Captive?” Agatha Delicious is assigned to look after a mischevious movie star. It looks like trouble when the statuesque beauty is found bound and gagged, and her charge is nowhere to be found. The concerned assistant director removes her cleavegag and asks her to explain what happened, and she’s embarrassed to admit that she was playing a tie-up game with the star… and it was all her idea! Once she was helpless, he ran off and left her to struggle. This terrible gaffe costs Agatha her job, but they don’t have time to free her before they start an all-out search for the AWOL actor. They just leave her with a vibrator and a duct tape gag, and the disgraced Ms. Delicious revels in a long bondage orgasm… 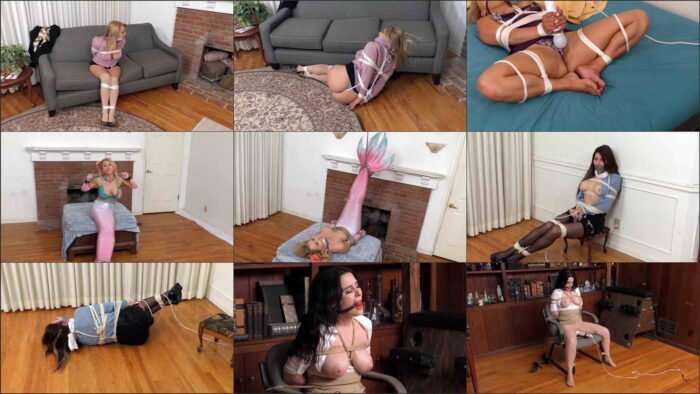