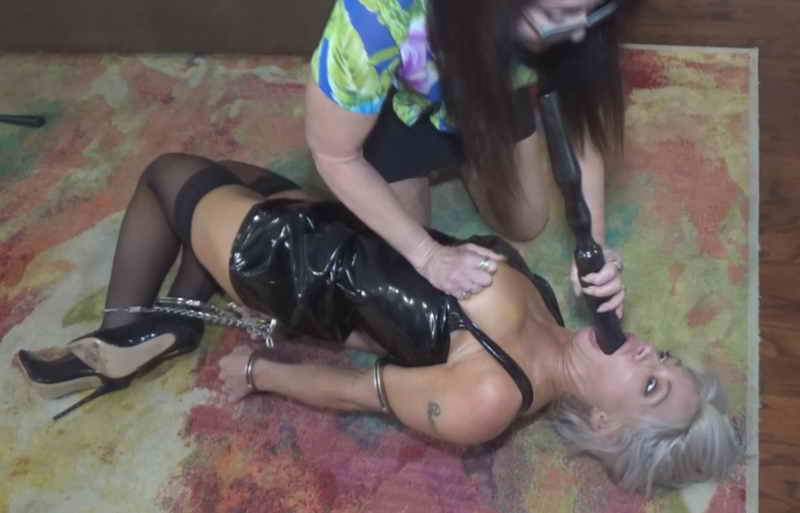 Hot busty platinum blonde Dominatrix Adara sits on her sofa getting red for her next client to show up. He is late and she is getting rather annoyed, she hates being kept waiting. She hears a knock on the door and expecting her subbie boy she opens the door but instead of her submissive she sees her bookie Hunter standing there. Adara looks up at the brutish man and begins to studder. He pushes inside and tells her that he is here to collect his money. Adara has had a run of bad luck in her gambling addiction and has been hoping to avoid Hunter until she can get enough money together to payoff some of her gambling debt. She tells him that she is expecting a client any minute and she will have most of his money in a few hours. But Hunter is tried of waiting and being lied too, he tells her that if she doesn’t have his money right now then him will make her pay in other ways. Adara begs him to give her more time but he grabs her and drags her over to her sofa where he handcuffs, gags and sex toys are laid out. He grabs a set of handcuffs and locks the steel jaw around her bicep. Adara is defiant and demands that he stop as she struggles in her grasp. But he overpowers her and locks the other jaw around her other elbows so her elbows are now cuffed behind her back. Adara begs and cries as he locks her wrists together behind her back with another set of handcuffs. He tells her that she is going to be left here bound and gagged in her own restraints until later tonight when he plans on sending some pimps over to put her ass on the street to earn her way out of debt. Adara is mortified and tries to negotiate but Hunter pushes her onto her knees and locks a set of leg shackles around her slender ankles. The chain between the shackle cuffs is run between the chain between her handcuffs. Finally Hunter has head enough of her begging and crying and stuffs her big red ball gag deep between her teeth. Arara jaws are wedged painfully open by the big ball gag and he pushes her onto her belly and tells her that she should learn to pay her debt and stop being such a degerate gambler then he leaves her helplessly bound, gagged and hogcuffed in her own steel restraints. Adara struggles desperately on the floor wonder how she is going to get out of her predicament. Then she hears someone push her door open, Adara looks up in hopes that it is her client and she will be saved. But instead of her subbie boy she sees a very irate woman standing over her. … 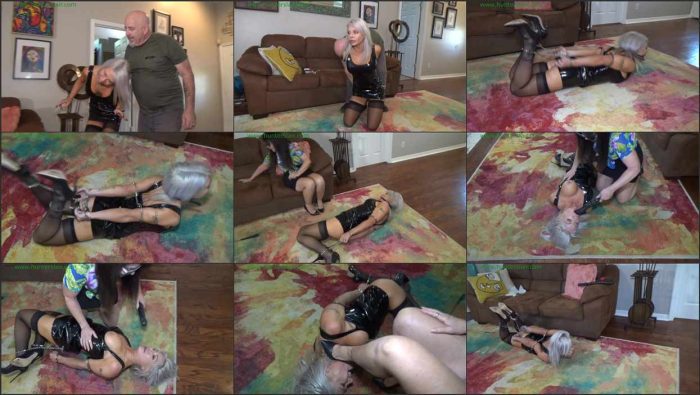 Terra Mizu Bound to a pole in steel cuffs and chains, jimhunterslair

Carmen Valentina Handcuffed bound orgasms with the controls just out of reach, jimhunterslair