Home » Bondage F/F » A reporter gets a lead on a fugitive & winds up gagged, hogtied & toe tied 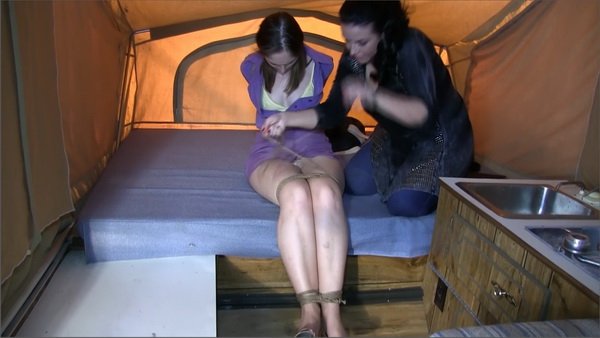 Rachel got a lead that a fugitive was staying in a pop up trailer not too far from her station. She goes to take a look, not really thinking it through. The woman catches her, holds a gun to her and makes her tie up her legs, then gag herself with a hanky and clear tape. Then the woman adds a wrist rope and elbow rope. She knows who the reporter is and is happy to get her hands on the pretty lady. She leaves the woman tied up and goes to see if anyone followed her, but the coast is clear. The reporter has gotten up and worked her way over to the table with the phone on it. She is trying to make a call when the fugitive comes in and grabs her, throws her on the bed and hogties her. She figures she has some time to kill and eventually takes off her shoes and sees that her pantyhose are the toeless kind for sandals and she can’t help but tie up her toes. She isn’t done. She adds black vetwrap over her already tight gag. She packs up her things and leaves the reporter there to head for Canada. Ties the girl and her step mom are in big trouble! Bound & gagged

Dumb slut yoga instructor tied up, gagged & humiliated for banging a married guy from her class.

No rope this time for Rachel & her sweet ass! Bondage video with JJ

Back to basics bondage with Sass