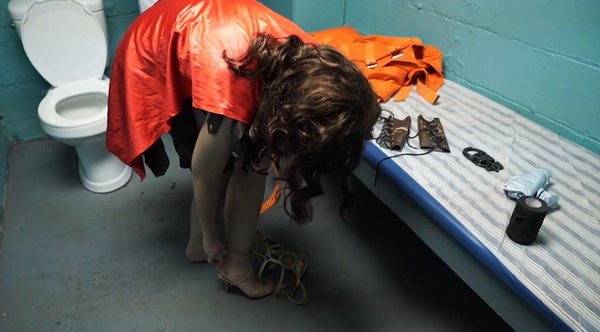 Rachel comes home from Halloween really drunk. She slumps onto her bed. When she wakes up a nurse is in there that talks to her about having a drinking and pill problem. Rachel tries to defend herself but she finds herself being cuffed at the wrists and ankles by the woman who then puts a metal posture collar on her and hogcuffs her with a chain. Shortly thereafter she puts an open mouth gag in her mouth so she can’t yell and bother her neighbors. A few minutes late the woman comes to take her away. The scene cuts to Rachel and the nurse in a cell. The nurse tells her that this is part of he treatment to get better. She gets into orange pants, gags herself, and is straitjacketed. The nurse leaves and the woman paces around for a few minutes before she returns and changes her gag to a harness ballgag and then ties her up with rope and hogties her on the bench. She leaves Rachel again..A few minutes later Rachel wakes up in her bed at home. Her Xena costume is missing and some of the kinky medical things are on her bedstand. What happened to her that Halloween night?