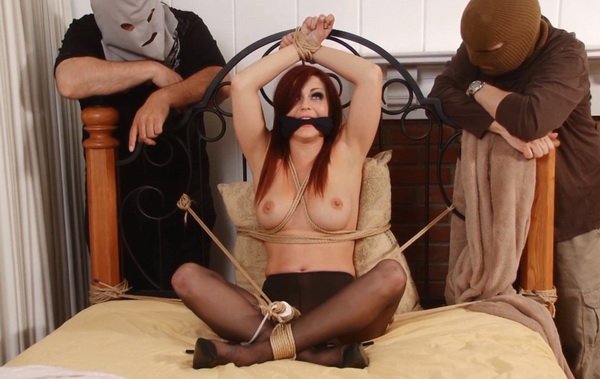 Now this sensational bondage fantasy can be yours at a bargain price! Sexy secretary Carissa Montgomery is working late at the office of the B & G Company when she’s confronted by a masked intruder. The burglar makes the busty blonde remove her panties and stuff them in her mouth. Ms. Montgomery is then handcuffed, cleavegagged and her ankles are bound. Left alone, she hops up and tries to get to her phone to call for help. But her attempt is discovered, she’s tied to her chair and her enormous breasts are exposed by the ski-masked villain. She struggles in vain to free herself, but then Carissa’s captor returns to let her know their night together is just getting started.
Carissa suspects something very strange is going on. Instead of making a quick getaway, the burglar compels his gorgeous hostage to put on sexy black lingerie. He’s silences her with a layered wrap-gag, then takes his time to tie her in various positions that show off her voluptuous figure. And he tells her strange things that make no sense to her, like saying that he’s keeping her thoroughly gagged at her own request.
The burglar then binds the hapless secretary to a chair with a powerful vibrator secured between her thighs. Carissa is helpless to escape the unrelenting hum of the device, and before long she surrenders to a shuddering orgasm. Afterwards she’s finally released by the intruder, and she asks why he’s doing this to her. He tells the surprised secretary that he believed this was all her idea. He informs her that the “burglary” was all just a roleplaying game set up through her profile on a kinky dating site. Carissa quickly realizes they’ve both been victimized by her scheming supervisor, and now she wants revenge!
The burglar and his masked comrade pay a visit to supervisor Sarah Brooke at home. The busty redhead is grabbed and ballgagged by the sinister housebreakers. Sarah is roped into a strict hogtie on the bed, and her considerable breasts are exposed. She energetically struggles to free herself while the intruders do a search on her computer. But her efforts are for naught, and Sarah’s captors are now certain she’s the one responsible for “catfishing” both Carissa and the burglar.
Ms. Brooke is stripped down to her pantyhose and heels, cleavegagged and bound to the bed with a Hitachi vibrator tied in place. Her captors linger close by and watch as the stunning babe fights the ropes and the siren song of the insidious device. But escape is impossible, and before long Sarah experiences a helpless orgasm while her captors enjoy the humiliating display. But Sarah’s ordeal isn’t quite over yet!
Sarah is compelled to put on a fetishy ensemble and heels, and she’s secured with handcuffs, leg-irons, chains and locks, and she’s gagged with microfoam tape wrapped securely around her head. She’s driven out to a neighborhood, then pulled from the back of the car. She’s told there’s a BDSM pride parade three blocks away, and it’s up to her to get there and find help. He exposes her breasts and Sarah’s tormentors exit, leaving the embarrassed, chained-up babe to try to find her way to freedom. 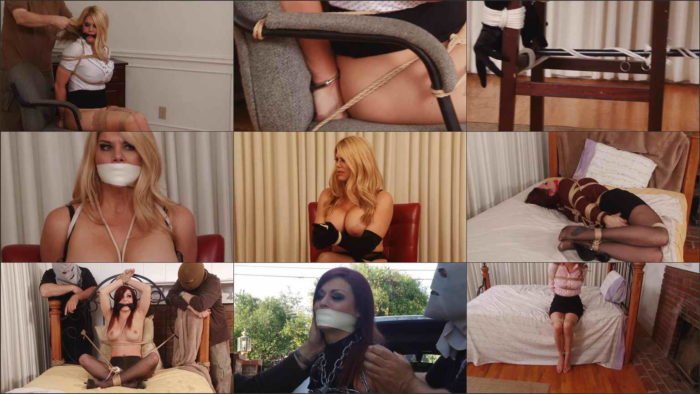 That Lady in Rope Bondage by Jon Woods – The Complete Video