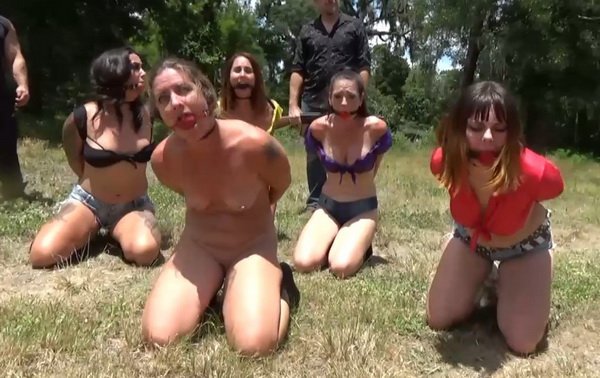 Five friends – Carissa Dumond, Misty Meaner, Slyyy, Fayth on Fire and June Berry – are hiking in the woods enjoying some sunshine & camaraderie. They chat as they hike when Fayth spots Eric Cain digging a hole. He’s guarded by me and as they attempt to hide themselves behind a tree my two henchmen Jim Hunter and Tony Dinozzo. The men march the booted women up to Eric and I then push them onto their knees with their hands overhead. Jim zip ties their necks while I shove a ballgag into each of their mouth. Feisty Fayth argues and fights demanding to know what is in the hole. I grab her by the air lifting her to standing then make her strip off her clothing. I tell Eric to smack her ass to calm her down. We ziptie her hands then follow suit with each of the four others. We march the girls to the van where we chain Fayths ankles to the back of the van. The others are stripped then I video them one at a time having them show off their bodies for an online auction. The girl with the least bids will be chained next to Fayth and driven away. After their show I announce that Misty got the least amount of bids and Jim chains her behind the van to be dragged next to Fayth. Misty begs and pleads saying she will blow each of the men in order to be spared. She gives Jim a blowjob then Tony face fucks her. Eric wants no part of the slut so instead he gives her ass a beating. Now poor Slyyy has to be chained next to Fayth. We make the others watch as Eric drives off pulling the two helpless naked damsels behind the van. When he returns we gather the three girls left into the back of the back zip tied and gagged struggling helplessly as they are driven to a building. They’re takken out of the van and tied to chairs. The men attach nipple clamps to each of our prey as they sob in fear into their gags. Eric whips and manhandles Misty as we wait for the bidders to arrive. Next the three are bound up against the wall with their hands held over their heads. We turn them around to begin the auction. The girls are put on their knees with Jim and Eric finish tying them up. The helpless girls sob and beg for mercy but it is too late … the captives shake in fear knowing that the auction has ended and the winners have arrived to watch them be demolished … 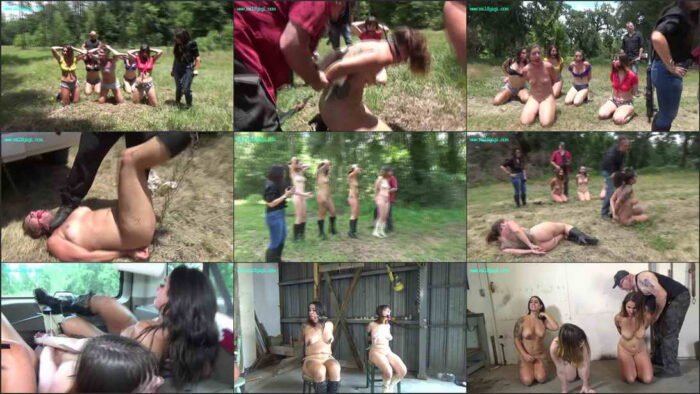 Raven gagged, tied up and held until her husband pays up

Erica Ross forced orgasms on the one bar prison